Joanna Jedrzejczyk, the pioneer of the UFC Strawweight division, ruled with a iron grip for nearly 3 years, until ‘Thug’ Rose Namajunas came along.

Joanna went a stellar 14-0 with 5 title defenses and looked all set to continue her reign at UFC 217, until a huge left hand landed from ‘Thug’ Rose at Madison Square Garden. She relinquished her title that night along with 2 other champions (Michael Bisping and Cody Garbrandt) in an historic UFC event.

The UFC ran the fight over again at UFC 223, and Joanna Jedrzejczyk once again came up short. She lost a close fought battle via UD. Joanna is now back again on the chase back to the title. Rose though, has some strict stipulations on a potential 3rd fight. 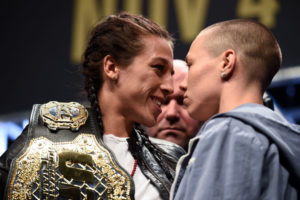 ‘Thug’ Rose has some stipulations for a potential 3rd fight

Joanna Jedrzejczyk was criticised heavily by the fans and the media for her inability to accept defeat. She came up with a myriad of excuses both times she lost – and that did not sit well with Champion ‘Thug’ Rose.

“Right now, that fight doesn’t really interest me at the moment,” said Namajunas to TMZ Sports.

“I think I’d be interested to see how she does with somebody else before even entertaining that possibility. At the moment, there’s not much to gain from running that back again.”

Thug Rose handed out stipulations for the re-rematch.

Joanna Jedrzejczyk though, doesn’t look like she is bothered and seems to have a ‘tunnel vision’ back to the championship. Joanna is scheduled to fight Tecia Torres at UFC Calgary on July 28, 2018.

UFC: Joanna Jedrzejczyk says that she will get another title shot if she defeats Tecia Torres

UFC: Rose Namajunas says she would like to test her jiu-jitsu against Mackenzie Dern