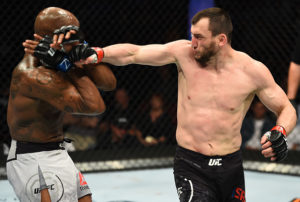 The UFC organization was notified today that the U.S. Anti-Doping Agency (USADA) has informed athlete Muslim Salikhov of a potential Anti-Doping Policy violation stemming from an out-of-competition sample collected on June 7, 2018 in Russia.

USADA, the independent administrator of the UFC Anti-Doping Policy, will handle the results management and appropriate adjudication of this case involving Muslim Salikhov. Under the UFC Anti-Doping Policy, there is a full and fair legal process that is afforded to all athletes before any sanctions are imposed. Additional information will be provided at the appropriate time as the process moves forward.

UFC: Daniel Cormier wants to drug test the hell out of Brock Lesnar