UFC: Scorecards for UFC Denver show that Yair Rodriguez was 1 second away from a loss 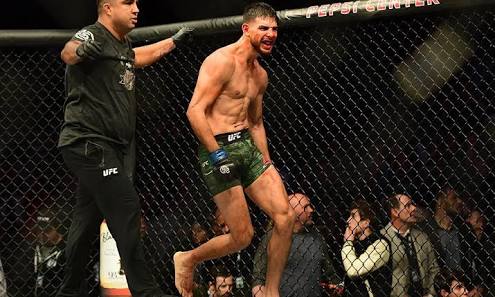 The night also marked UFC’s 25th Anniversary and the main event certainly paid justice to it. What was a back and fourth brawl for more than 24 minutes, expected to go the similar route until the bell rang however with one second left, Rodriguez out of no where pulled out what would be called a ridiculous reverse elbow, to floor Jung out unconscious thus securing a KO victory.

The bout will definitely go down as a candidate for not only the knockout of the year for Rodriguez but also the fight of the year for both of these warriors. The fight until then seemed extremely close but the judges scorecard tell a different story. (via Twitter):

Here's the scorecard for Yair Rodriguez vs. The Korean Zombie for those interested #UFCDenver pic.twitter.com/lAh00Y5sNl

The judges actually had Jung winning fairly comfortably until then which means Rodriguez was a second away from defeat. Out of the four rounds, two judges gave only one round in the favour of Rodriguez and one judge gave him two.

Both Jung and Rodriguez had their respective moments throughout the fight however Jung paid complete justice to his nickname of the ‘Korean Zombie’ by continuously walking forward towards Rodriguez thus solidifying the earlier chunk of the fight. Rodriguez then was able to find his rhythm in the third round however Jung again regained momentum by tagging Rodriguez a multiple times.

Previous articleUFC: RDA to McGregor on his tweet about the flyweights: ‘You’re drunk!’
Next articleIsrael Adesanya talks about disclosed UFC pay vs. undisclosed pay