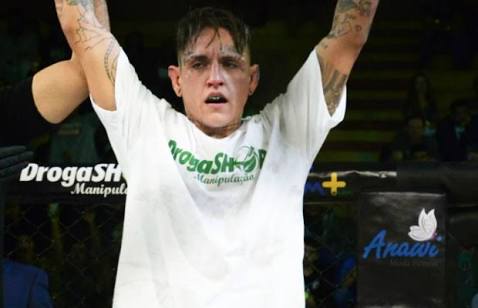 Over the years professional and regional organizations like Bellator, Legacy Fighting Association, Titan FC, Cage Warriors, Cage Fury Fighting Championships, etc have always been a factory of providing highly polished fighters to the UFC. This time however  India’s own Super Fight League product Sarah Frota Lima has a chance for a UFC contract.

The league possessed eight team based upon eight cities. Frota Lima was a part of Mumbai Maniacs. Even though Maniacs couldn’t win a match, Frota Lima won both of her fights in a dominating fashion.

Sarah ‘A Treta’ Frota Lima is an undefeated flyweight prospect. She was born in Goiania, Brazil. She fights out of Astra Fight Team which serves as a training ground for talented UFC fighters like Erick Silva, Junior Albino and highly hyped UFC welterweight Darren Till who takes on two-time title challenger #1 ranked welterweight contender Stephen Thompson at UFC Liverpool.

Frota Lima made her SFL debut on February 9, 2018 against Brazilian Tataine Contes do Couto. She won the fight via triangle choke in the first round. As the format demands just a week later, she fought another fellow Brazilian Maiara Amanajas Dos Santos. She again won via triangle choke. Frota Lima is known for her BJJ as out of her eight victories, five have been by the way of submission.

In November 2017, Bharat Kandare made history by becoming the first native Indian to fight in the UFC. He joined SFL in December 2012 and in the same year became the SFL Featherweight champion. Another fight who competed in the SFL and made it big is none other than Bellator welterweight superstar Michael Venom Page. He fought twice in the SFL in November 2012 and April 2013 before defeating a number of welterweights in Bellator and is still undefeated.

Previous articleMMA: Fedor Emelianenko was visited by FBI agents prior to his fight with Frank Mir
Next articleUFC: Amanda Cooper rips Mackenzie Dern, says she has ‘no wrestling’ and can’t handle her power