UFC: Shevchenko picks Cyborg over Nunes because she ‘doesn’t tire’ 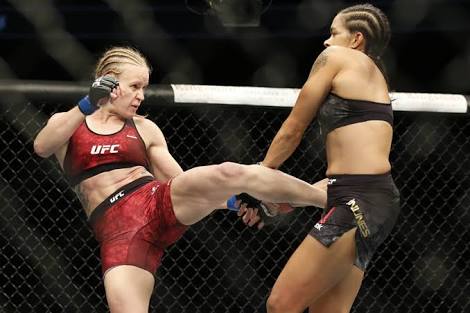 The task in front of her is a mammoth one however as she will have to go pass the most dangerous female to ever step inside the octagon in women’s featherweights champion Cris Cyborg at UFC 232 on December 29.

Nunes will step inside the octagon as a massive underdog. However Nunes is no joke either as she will present the toughest challenge for champ Cyborg. Weighing on the fight is a familiar face for Nunes, her arch rival and newly crowned women’s flyweight queen Valentina ‘The Bullet’ Shevchenko.

Shevchenko has fought Nunes twice and has dropped down on both the occasions, the second one being a controversial split decision. Speaking on MMAjunkie Radio, Shevchenko said cardio would be the factor which can be disadvantageous for Nunes as she picks Cris Cyborg to win.

“Cris has an advantage in her endurance – a very huge advantage, because she’s training like a fanatic,” Shevchenko said. “And most important, she’s not tiring.

“In the morning, she runs marathons, and after marathons, she comes to training and does her work hitting pads and sparring. She doesn’t get tired. She has the power to move forward. So in this fight, I will support Cris.”

Previous articledemo
Next articleUFC: Colby Covington brings the heat on Nick Diaz : All he can do is beat up chicks!