SINGAPORE – UFC announces that an additional five bouts are official for UFC® FIGHT NIGHT: MAIA vs. ASKREN on Saturday, October 26, in Singapore, including a pride of the nation bout between Peru’s Enrique Barzola and Russia’s Mosvar Evloev, and a high octane striker’s bout between Muslim Salikhov and Laureano Staropoli.

The main event will feature two of the most talented grapplers to compete in the Octagon® as No. 10-ranked welterweight contender and Brazilian Jiu-Jitsu black belt Demian Maia takes on No. 11-ranked former Olympic wrestler Ben Askren.

Rising featherweight stars from two countries will collide when Enrique “El Fuerte” Barzola (16-4-1, fighting out of Lima, Peru) meets Mosvar Evloev (11-0, fighting out of Ingushetia, Russia). Barzola was the lightweight tournament winner at The Ultimate Fighter 2: Latin America and subsequently won six out of eight Octagon appearances. Evloev is undefeated throughout his reign as a champion in Russia, which carried over to his UFC debut at UFC® FIGHT NIGHT: OVEREEM vs. OLEINIK in April this year. Both well-rounded athletes share commendable win ratios split between strikes and submissions. 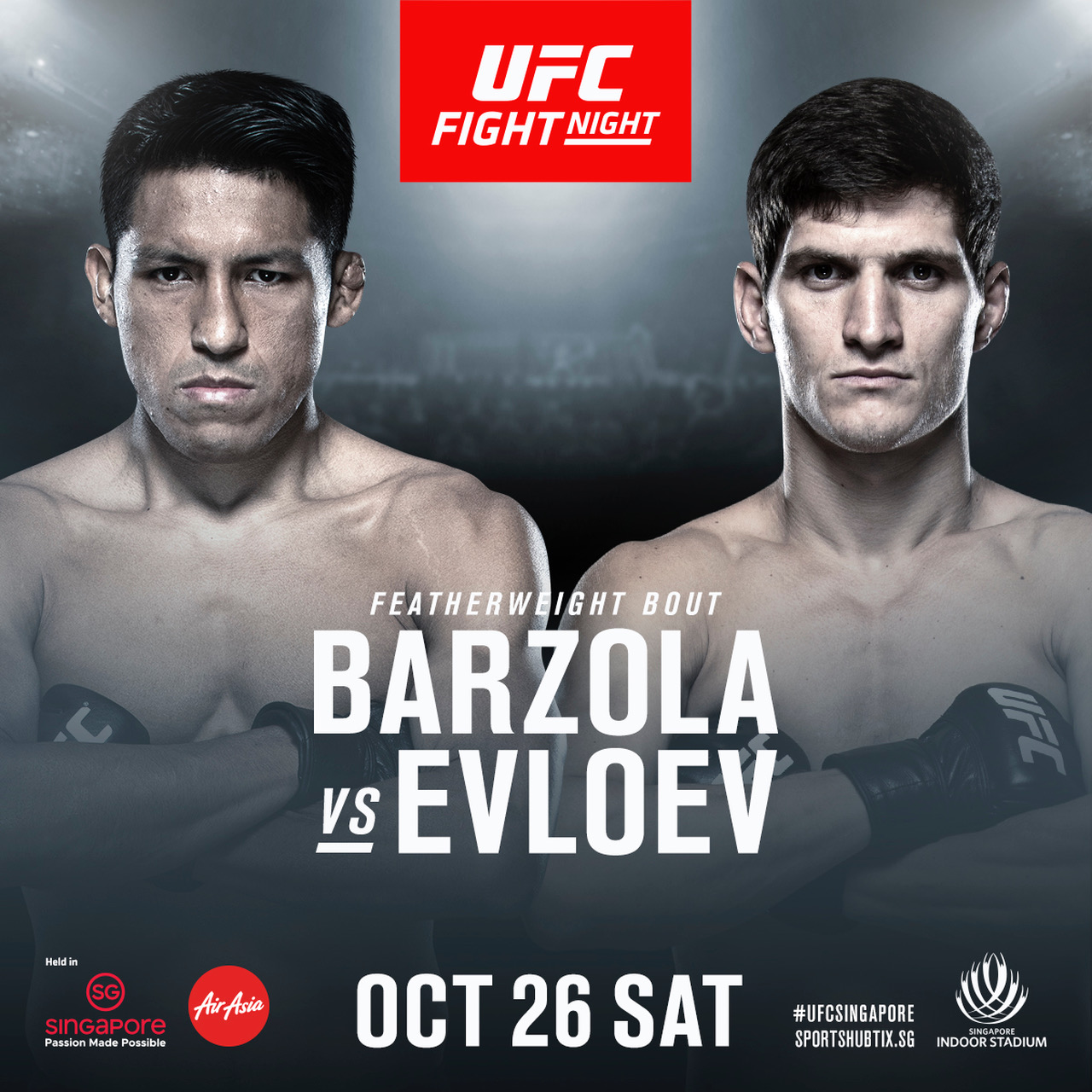 Female bantamweights Julia “Raging Panda” Avila (7-1, fighting out of Los Angeles, Cali., USA) and Karol Rosa (12-3, fighting out of Vila Velha, Brazil) will both make their sophomore bouts in Singapore. Avila is on a three-fight win streak which includes her UFC debut decision over Pannie Kianzad in July. Rosa also returns in quick fashion after a split decision over Laura Procopio at UFC Shenzhen in August, her third victory in a row. 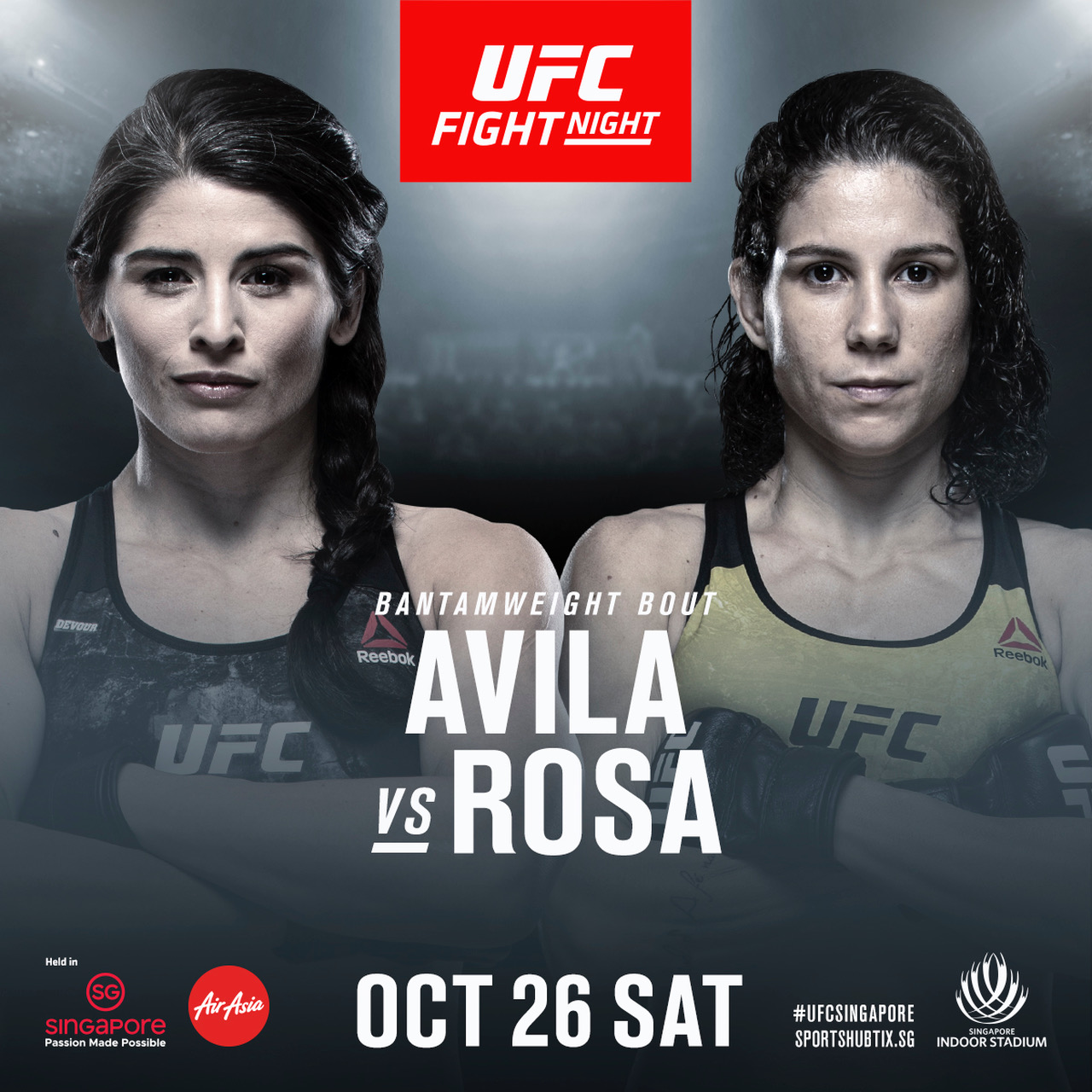 More heavyweight action goes down in Singapore as Raphael “Bebezao” Pessoa (9-1, fighting out of Rio de Janeiro, Brazil) takes on Jeff “Lights Out” Hughes (10-2, fighting out of Canton, OH, USA). The powerful Pessoa is looking to bounce back from his first career defeat to Ciryl Gane in his UFC debut. Hughes is also seeking to avenge his UFC debut loss which came at the hands of Maurice Greene in their rematch in March. 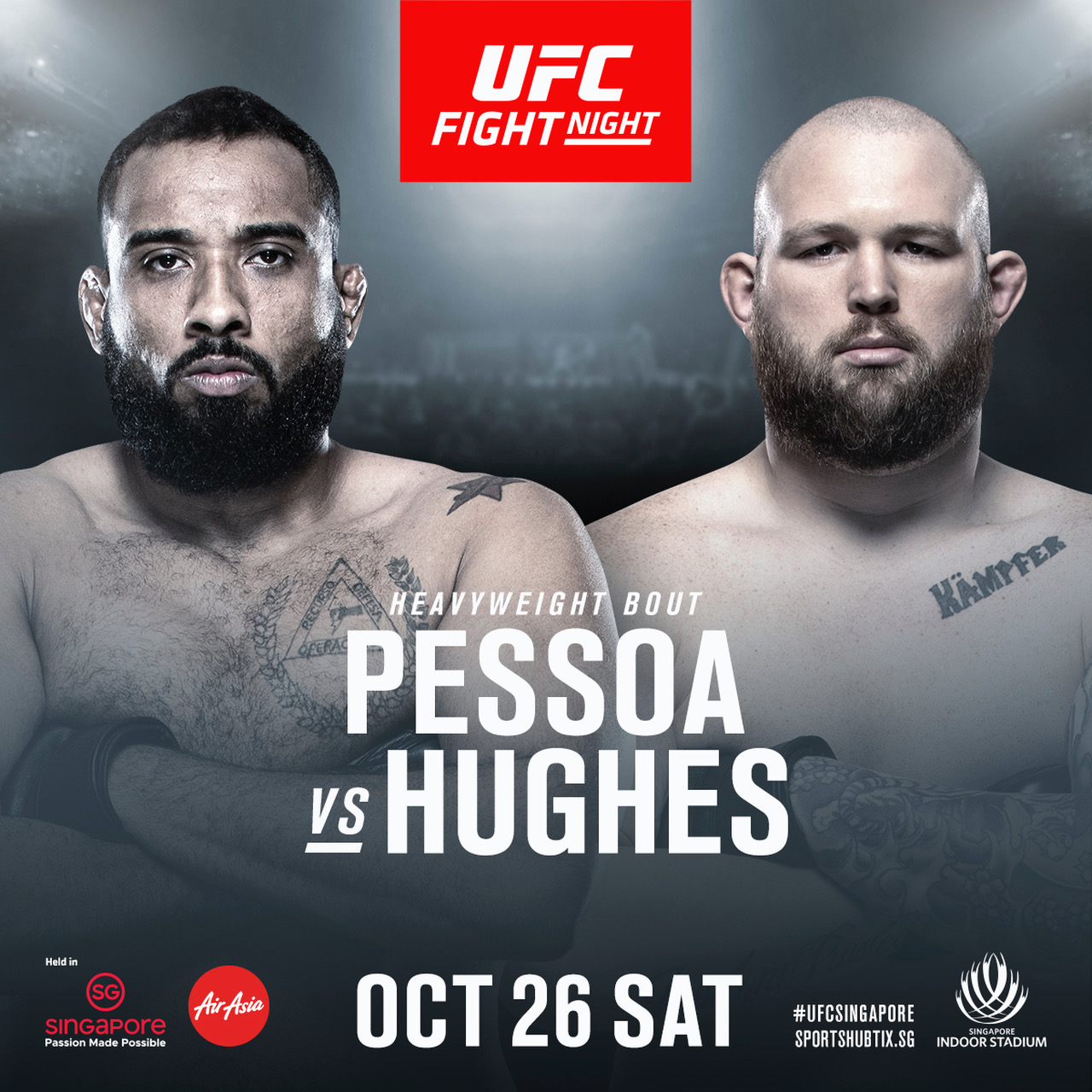 A welterweight bout is set between strikers Muslim “King of Kung Fu” Salikhov (15-2, fighting out of Dagestan, Russia) and Laureano “Pepi” Staropoli (9-1, fighting out of La Plata, Argentina). Salikhov is a sanda champion with an astounding finish rate who is on a two-fight streak in UFC after his knockout of Nordine Taleb at UFC® 242: KHABIB vs. POIRIER. Staropoli earned a Fight of the Night award in his hometown Octagon debut in Argentina, and followed the victory with another decision over highly experienced Thiago Alves. 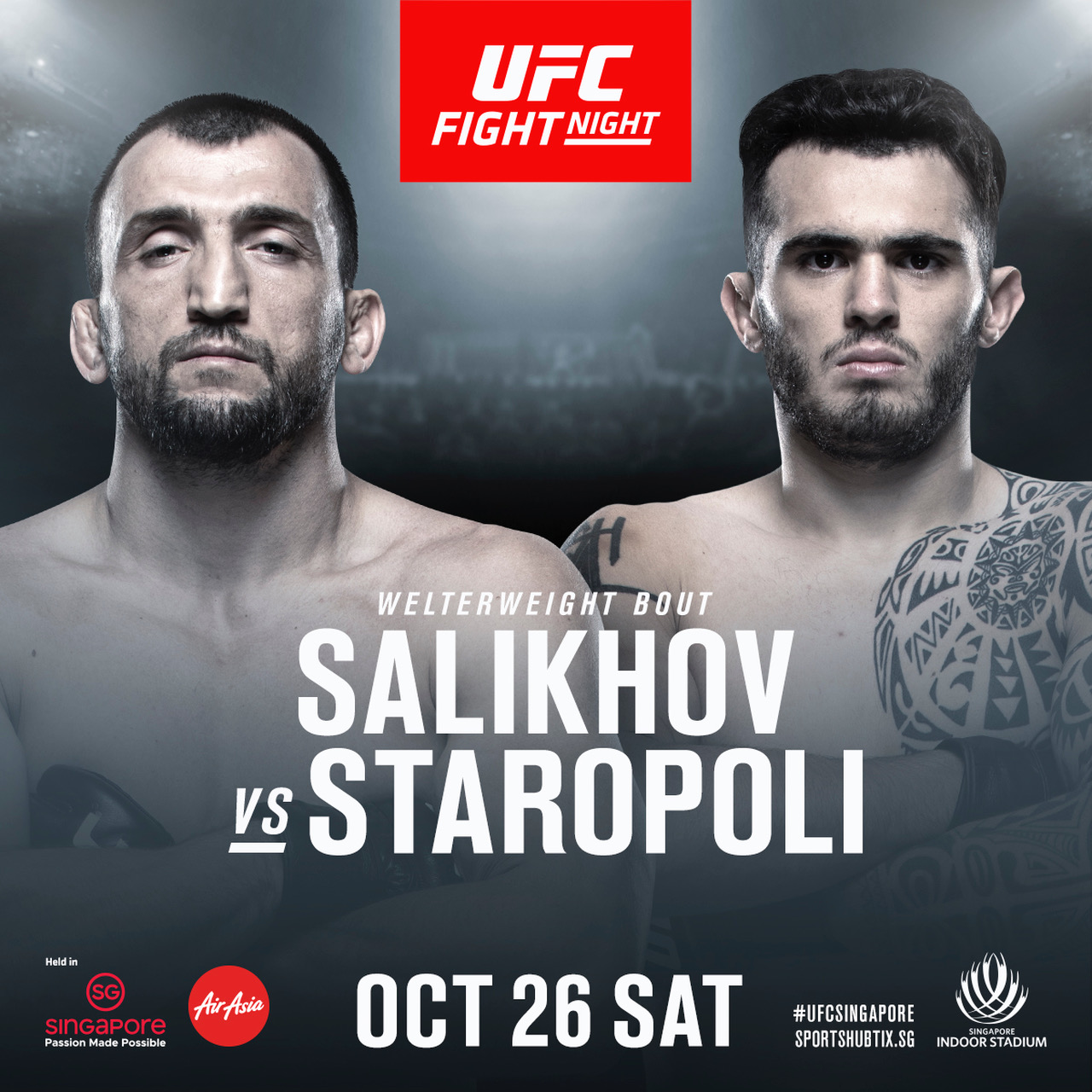 Lightweight prospect meets veteran when Rafael “Ataman” Fiziev (6-1, fighting out of Kordai, Kazakhstan) faces Alex “The Spartan” White (13-5, fighting out of Columbia, MO, USA). Fiziev entered the UFC as a highly-regarded first round finisher and will now look to recoup his prospect status after his debut TKO loss to Magomed Mustafaev in April. White is now 4-5 during five years in UFC with a win over Artem Lobov and a most recent decision victory against Dan Moret in March. 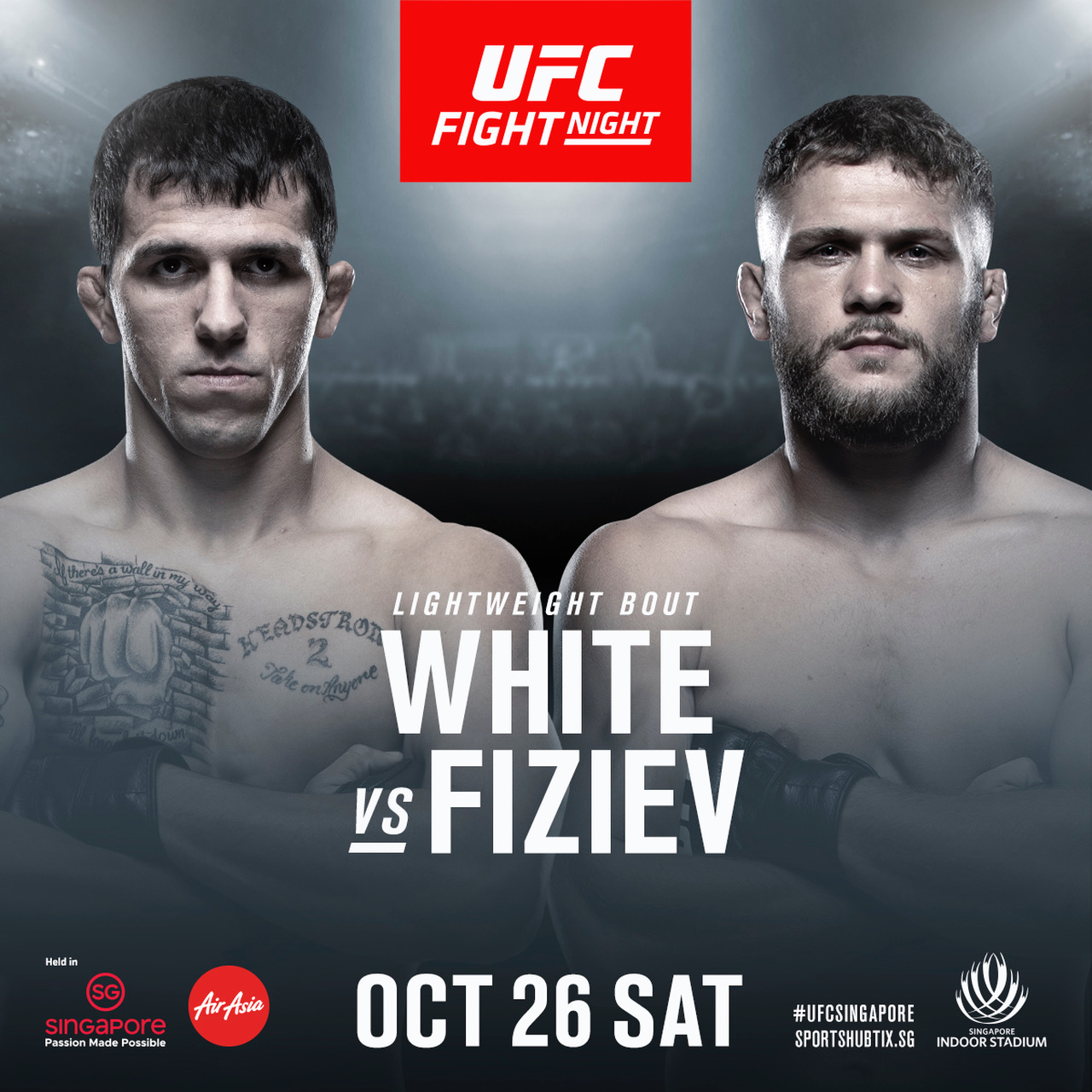 “We are excited to announce five more incredible bouts to UFC Fight Night Singapore,” said Kevin Chang, UFC Senior Vice President for Asia Pacific. “These match-ups represent everything from national pride to world class striking; rising prospect verses grizzled veteran. This is an opportunity for our fans to see a diverse range of premier MMA.”