UFC Heavyweight Champion Stipe Miocic says UFC called him two days prior to Ngannou fight about the potential of fighting UFC Light Heavyweight Daniel Cormier. Stipe says he even hung up the phone. Stipe says the UFC official called him two days prior to UFC 220 in January to ask him about fighting Cormier and coaching The Ultimate Fighter against him.

“It had nothing to do with Cormier,” Miocic said. “Dude, leave me alone — I’m fighting in two days. You’re talking about how I’m gonna get hit by the Ford Escort power and you’re gonna come at me with this?” 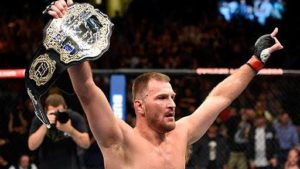 After beating Ngannou at UFC 220, UFC called him again, but Stipe says he was not interested in coaching TUF since his wife was pregnant with their first child.

“I’m not gonna worry about it,” Miocic said. “My wife is a tough cookie. She’s the captain, as they say. She leads the ship. It’s gonna be hard for me. It’s gonna take a while for me to get over it, not being there. I’m doing it for my family, though. It’s not just I’m fighting. It’s also making sure things are taken care of.”

Stipe Miocic is defending his Heavyweight title against Cormier this Sunday on Sony ESPN.