UFC: TJ Dillashaw explains why he refused to fight Cody Garbrandt at UFC 222 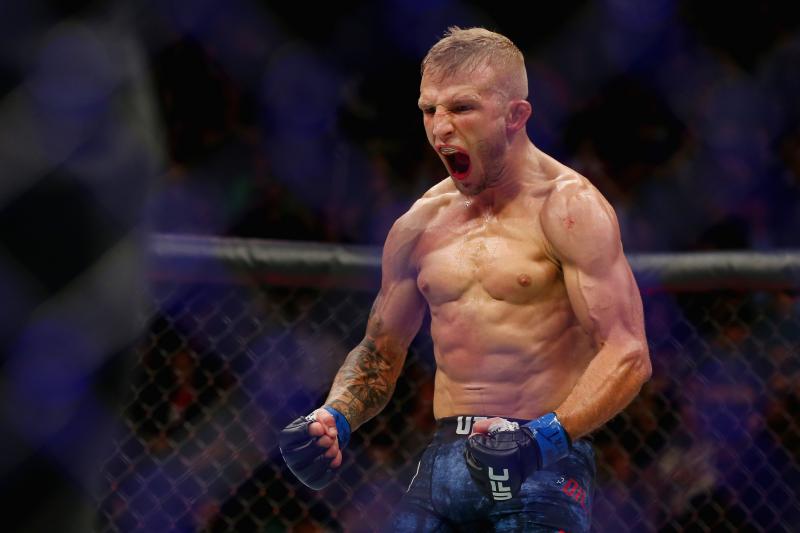 In his recent appearance on the MMA Hour, UFC Bantamweight champion TJ Dillashaw explained why he did not take the fight against Cody Garbrandt at UFC 222.

UFC’s plans for the pay-per-view fell apart after Max Holloway got injured. Holloway was scheduled to headline the show against Frankie Edgar in a Featherweight title fight but the Hawaiian’s injury left UFC scrambling for a new main event.

Dillashaw was subsequently approached with an offer to fight Cody Garbrandt at the event. Dillashaw, however, refused to do the same.

“They just kinda wanted me to save the card, and unfortunately I wasn’t able to. I’m dealing with some injuries that I was trying to keep quiet, but they kept hammering on me and hammering on me to take this fight. But I just wasn’t healthy. It’s not only to take a fight on four weeks’ notice, but also being injured and I haven’t been training and (recently) having a kid put a wrench in that whole thing too,” he said.

It was not about the money

The champion then went on to reveal that the decision was not about money and went on to add that it was a no-brainer decision.

“It was a no-brainer, man. I mean, they kept trying to ask me to do it, but yeah, it was a no-brainer. I just knew it wasn’t the time. They thought I was, like, maybe holding back for more money or whatever it is. But it just came down to not being healthy.” Dillashaw added.

The 32-year-old won the UFC Bantamweight title by defeating Cody Garbrandt at UFC 217. He is currently on a three-fight winning streak and in the interview; he also took out time to take a shot at Garbrandt.

“Let him continue to talk, be myself, and the more he talks, the dumber he looks, and more people will continue to realize it,”

Dillashaw concluded by saying that he is working towards a champion vs. champion fight against Demetrious Johnson.

Previous articleUFC: Tyron Woodley eager to defend his title, buries beef with Dana White
Next articleUFC: Floyd Mayweather Sr. believes that his son will fight in the UFC