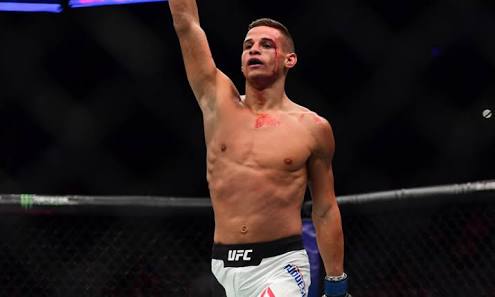 Bantamweight prospect Tom ‘Fire Kid’ Duquesnoy (16-2-1 MMA, 2-1 UFC) is set to make his fourth appearance under the UFC banner on possibly one of the biggest card of the year at UFC 232.

However, his opponent, former Cage Warriors bantamweight champ Nathaniel Woods can be a tuff assignment for anybody. Therefore for some special preparation, Duquesnoy has decided to reap the benefits of renowned gym Team Alpha Male in Sacramento, California.

Duquesnoy who already did five training camps at JacksonWink in Albuquerque felt the need to change up things a little bit. Keeping in mind Team Alpha Male’s expertise in lighter weight classes, that seemed to be an obvious option for Duquesnoy.

“For this fight, I will exclusively be doing it in Sacramento with Team Alpha Male, Faber’s team. They have welcomed me very well. I’m going to stay here for the whole camp, but usually I like to go everywhere,” Duquesnoy told MMA Fighting’s, Peter Carroll. “I used to train in France, Thailand, Brazil, and the U.S. a lot in Albuquerque, obviously. I was in Vegas for a few months and now I’m preparing this camp in Sacramento.”

Team Alpha Male also serves as a training ground for many ranked bantamweights and featherweights like former bantamweight champ Cody Garbrandt, Chad Mendes, Darren Elkins, Josh Emmett to name a few. Duquesnoy believes training alongside them would add up to his skills.

“It’s perfect for me because it allows me to stay at the top. They are all young and hungry. There are a lot of guys that are experienced, like Chad Mendes, and obviously, Urijah is leading the training, so I have a chance to learn from someone that was at the highest level.”

Previous articleUFC: Curtis Blaydes says Derrick Lewis had no business being in the cage with Cormier at UFC 230
Next articleRobert Whittaker vs Kelvin Gastelum is official for UFC 234