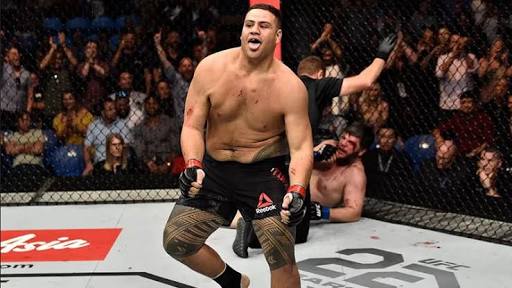 With some tension between both the fighters, the trash talk has begun. Tuivasa claims Dos Santos was the one who initiated the bad blood and hence he won’t think twice despite Dos Santos’ legendary status. Tuivasa took to Twitter addressing Dos Santos as ‘bald head’. (via Twitter):

Well I respected you @junior_cigano as a veteran of this sport but now since you want to talk shit about me. Let’s go then!! I’m coming for your bald head… 👴 Dec 2nd #UFCAdelaide #NoEnhancementsHelpingYouNow pic.twitter.com/CbeV8V0Xdl

Undefeated Tuivasa is on a three-fight winning streak. His last victory came against former champ Andrei Arlovski at UFC 225 in June. Dos Santos, on the other hand, is alternating between wins and losses and is 4-4 in his last eight fights.

Dos Santos managed to get things back on track at Fight Night Boise in July when he defeated former WSOF champ Blagoy Ivanov via a lopsided unanimous decision. He would certainly like to accomplish some consistency to cement himself a title shot in near future.

Previous articleWatch out Amanda Nunes – Cyborg and Shevchenko are training together!
Next articleUFC: Artem Lobov explains what ‘chicken’ means in Russia and why it started the feud