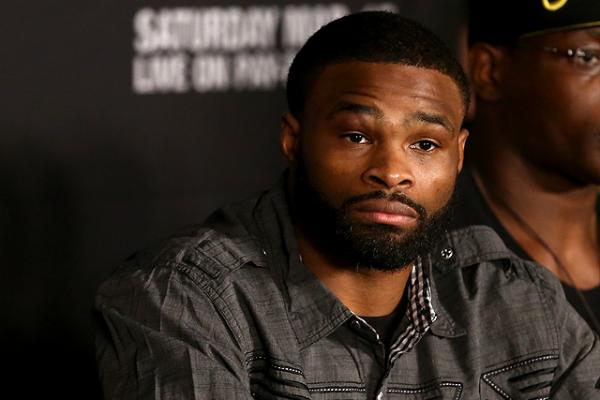 UFC Welterweight Champion Tyron Woodley is apparently eager to get back into the cage. Woodley (18-3) is currently recovering from a shoulder surgery, was featured on the “Hollywood Beatdown” segment by TMZ and during his appearance, Woodley noted that he wants to defend his belt at the earliest.

Woodley last fought at UFC 214 where he defeated Demian Maia via a unanimous decision. Prior to this, he had also secured a majority decision victory over Stephen Thompson at UFC 209.

In the interview, Woodley mentioned that he doesn’t know who is next but promised that he plans to knock everybody out.

“I’ve had a deep breath, had a weekend — I didn’t have much sleep because I’m always working — and I’m squashing everything. I’m focusing on getting the shoulder together. One-by-one, everybody will get these hands. I don’t know the order, I don’t know who’s next, but I never wanted to bounce around and not continue to defend my belt. I’ve been here for a while and I plan on knocking everybody out.” He said (transcribed by Sherdog)

Squashing the beef with Dana White

The 35-year-old also took time to talk about the friction that he has with fellow MMA fighters and UFC president Dana White. Woodley went on to say that he is squashing all of it and is only focussing on moving forward. He also reminded the fans of his knockout skills.

“People have a short-term memory on what I’ve been able to do: 11 finishes, nine in the first round, some of the most vicious KOs in UFC history. Those stats are never talked about, so therefore, I’m going to take a woosa. So if you people want to know about the Dana beef, about the Frankenstein beef, about the ‘Queefington’ beef, I don’t want to talk about it. I’m focusing on being successful.”

Woodley won the Welterweight title from Robbie Lawler back in 2016 and has two successful defenses under his belt.