UFC: Tyron Woodley considers Darren Till his ‘super fight’ and nothing else matters until after UFC 228 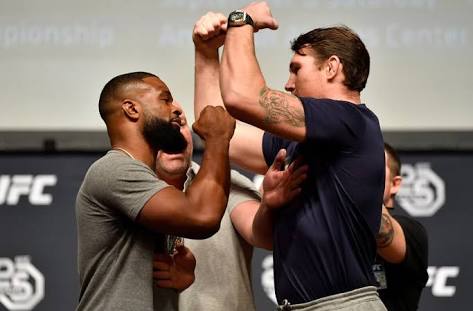 At UFC 228 this weekend, welterweight king Tyron ‘The Chosen One’ Woodley returns back in action to defend his belt for the fourth time against rising undefeated prospect Darren ‘The Gorilla’ Till. 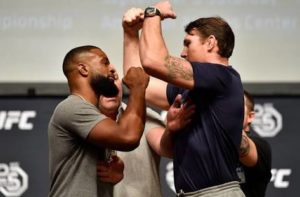 In an era where other champions were not defending their belts or fighting other champions in a ‘super fight’, Woodley defended his belt thrice in a span of mere eight months before suffering a shoulder injury.

During his time off, Woodley called out a number of potential high profile opponents like Georges St-Pierre, Nick Diaz, Nate Diaz. He even ignited a rivalry against lightweight champ Conor McGregor and was also willing to go up to middleweight to face then champ Michael Bisping. Unfortunately, none of the above opponents signed the dotted line and no fight was materialized. Woodley however has his entire focus on Till and considers him as his super fight.

“I’ve got a super fight coming up Sept. 8,” Woodley said ahead of UFC 228. “I’m focusing on that and giving your opponent the proper respect is the only way you can open up any other doors. So thinking too far down the road and it will be somebody else wearing your belt.

“My focus right now is fighting Darren Till, going out there and putting on a great performance. A fighter that’s worthy of my attention, bringing true skills to the table. I think that should be my focus. We’ll talk about any other type of fights after this fight is over with.”

Darren Till ready to impose ‘his will’ on Tyron Woodley

Previous articleUFC: Coach Javier Mendez assures Luke Rockhold will always be welcome at AKA
Next articleUFC: Darren Till says ‘I want to earn my stripes’ at middleweight before fighting for title