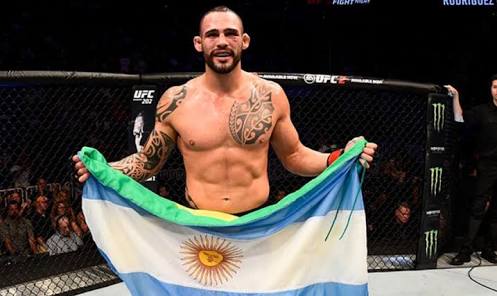 Last weekend at UFC Fight Night 140, UFC made it’s first trip to the South American country of Argentina featuring one of its own as hometown hero Santiago Ponzinibbio took on veteran Neil Magny in a welterweight barn burner.

However in a rare occurrence, it was found out that UFC Argentina prelims get more viewership than the main card on FS1. The UFC Fight Night 140 prelims featured four bouts averaged 707,000 viewers on FS1, while the six-bout main card averaged 632,000. Prior to the event, UFC televised a college football game between Michigan and Indiana, which could have resulted in a larger audience at the beginning of the card.

The above statistic came as a surprise especially keeping in mind the fact that all six bouts of the main card ended up being finishes. Main card also featured two hometown fighters in Santiago Ponzinibbio and Guido Cannetti whereas prelims featured only one hometown fighter Laureano Staropoli.

Ponzinibbio however didn’t disappoint his fans as he brutally knocked out Neil Magny in the fourth round. Staropoli won his bout as well against a very tuff Hector Aldana via unanimous decision.

Previous articleUFC Newcomer Maycee Barber wants to fill in for Ostovich against PVZ
Next article“Most to be thankful for”, Conor McGregor celebrates Thanksgiving day