UFC: UFC debut of Mackenzie Dern was the biggest draw of UFC 222 undercard 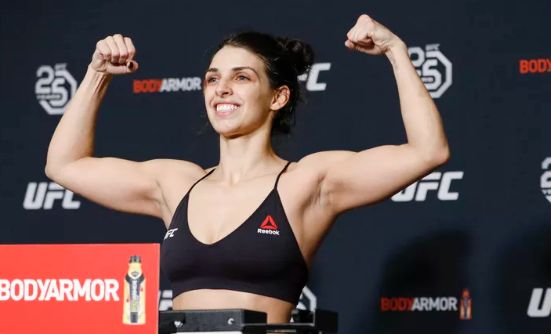 UFC 222 was a huge show for UFC. Cris Cyborg secured yet another title defense at the event when Brian Ortega stopped Frankie Edgar to become the new number one contender for the UFC Featherweight championship.

Another major development from the show was the UFC debut of Mackenzie Dern. The Brazilian went up against Ashley Yoder during the prelims and managed to go home with a split decision victory.

Though the fans were quick to point out the gaping holes in Dern’s game, there was a sense of curiosity and interest about Dern’s UFC debut. And his translated into huge numbers for Dana White.

During the fight, Dern proved that she is a legit draw for the promotion. Her fight with Yoder drew 1,076,000 viewers which were the highest peak of the undercard. Interestingly, UFC 222 had stiff competition on television in the form of college basketball, NBA, and NHL.

It also went head to head with the Boxing showdown between Deontay Wilder and Luis Ortiz. The fight did 1,055,000 viewers which is slightly lesser than the number that Dern’s debut drew.

However, FS1 is available in more than 83 million homes whereas HBO and Showtime have a combined number of more than 60 million only.

On an average, the show did 905,000 viewers and another 12,209 through streaming. This was a huge improvement on UFC’s last show on the platform. It is also the second largest streaming number for a UFC behind with the first being UFC 217 which was headlined by Georges St. Pierre and Michael Bisping.

Also, the average number is similar to that of UFC 220 headlined by Stipe Miocic and Francis Ngannou.