In an exciting fight, Jan Blachowicz defeats Aleksandar Rakic via TKO in Round 3.

The opening round started with Aleksandar Rakic kicking Jan Blachowicz’s leg early on followed by a combination of jabs. Rakic caught Blachowicz early with his right jab which cut open Jan’s eye. In the second half of the fight, Blachowic was able to make a comeback as he rocked Rakic with a hard right hand and then went on to check many of Rakic’s leg kick and also landed kicks of his own which caused Rakic to change stance as he was getting dominated by the kicks.

In the second round, Aleksandar Rakic was able to make a good comeback, as he took down Blachowicz. Although Jan tried to catch Rakic in a triangle choke, Rakic was able to escape and he dominated the remainder of the round on the ground. 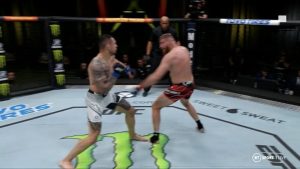 In round 3, Jan landed a low kick and as Rakic took a step back, when his knees popped and he went stumbling down on the ground.

Previous article
Pawan Maan Singh to fight Aili Muratbek at Road to UFC on June 9
Next article
Chael Sonnen says Alexander Volkanovski is ALREADY the G.O.A.T at 145, doesn’t need a third win over Max Holloway to prove it