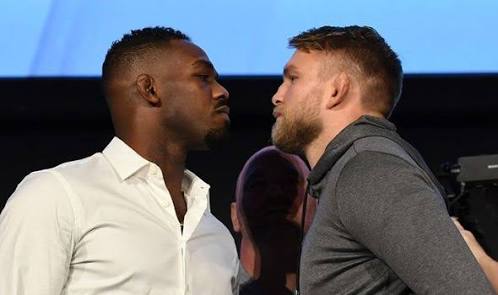 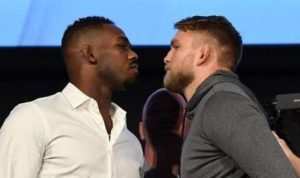 However the much anticipated main event looked in serious jeopardy as Jones once again lost the toughest battle of his career, that is with the drug tests. That was taken care of as the entire card was relocated to California from Las Vegas as the Nevada State Athletic Commission didn’t allow Jones to compete.

That been said, the UFC had arranged a pre-fight press conference featuring Jones, Gustafsson, Cyborg and Amanda Nunes. Things however got a bit heated as Jones and Gustafsson exchanged a few words. (via YouTube):

Gustafsson in his earlier interviews, never had something negative to say about Jones, however he pointed out that he has been angered by the relocation of the card as other fighters and their families had to deal with the haphazard arrangement.

Gustafsson was asked whether he believes Jones is a cheater or not to which ‘The Mauler’ wasted no time in saying ‘Yes’. Gustafsson also claimed that Jones lacks ‘confidence’ as he has to inject external substances in his body. Jones backfired with his claim that is stupid of Gustafsson even believing that a ‘picogram’ of a banned substance can enhance his performance.

The only place where they could settle the score is inside the octagon.