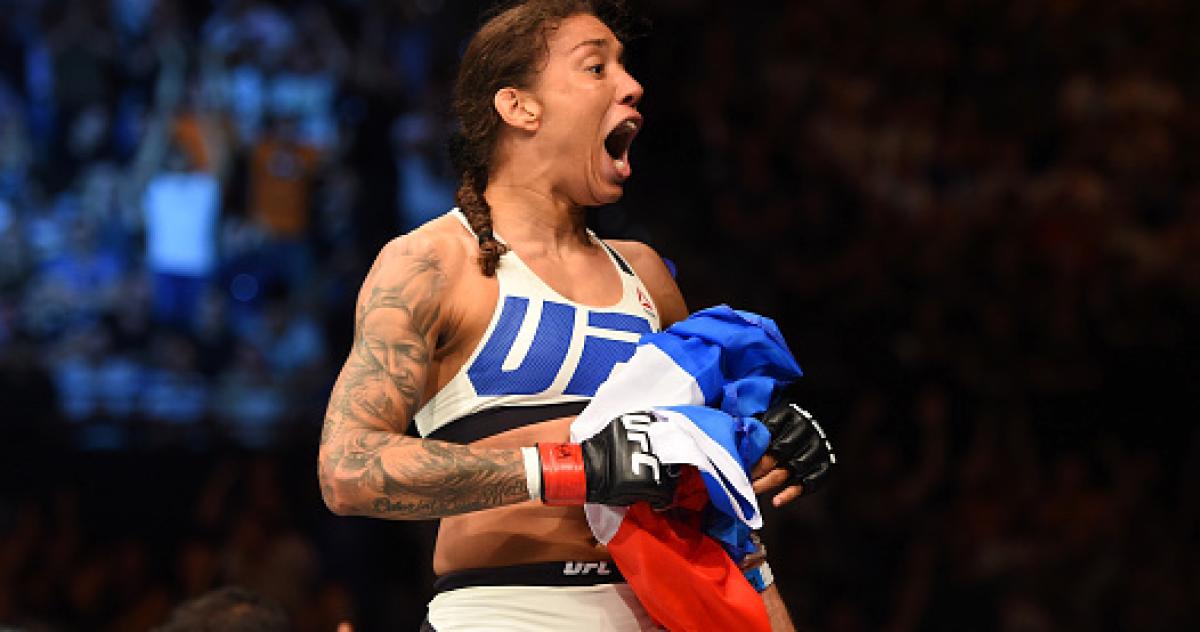 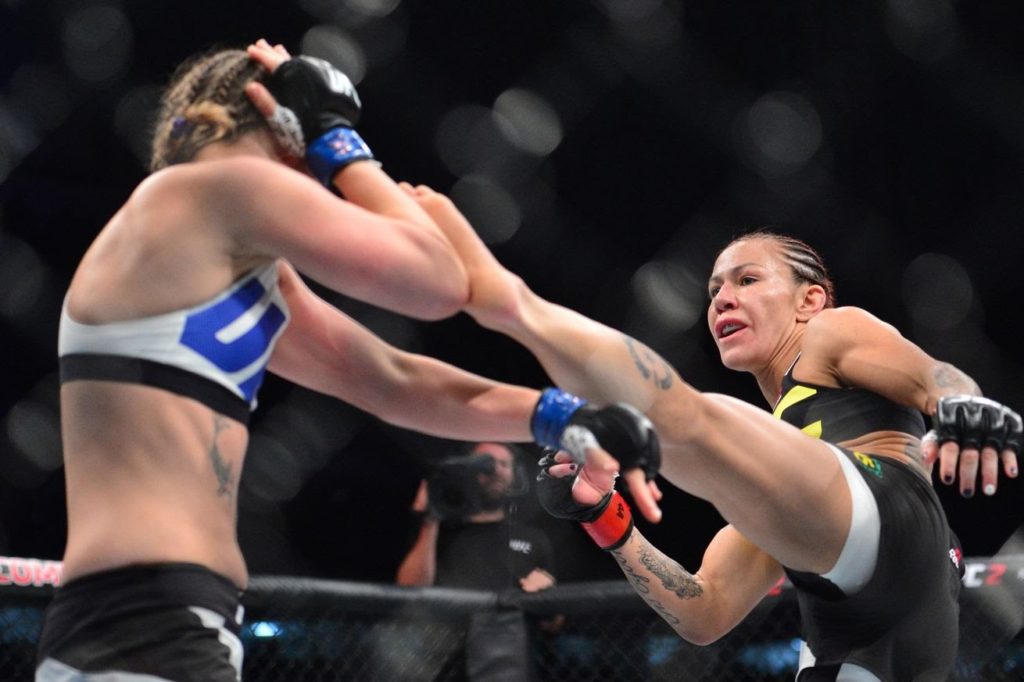 The fight was a controversy in itself. At the end of  the 2nd and 3rd round de Randamie continued to throw strikes after the bell had sounded. De Randamie was let off both times and wasn’t docked a point.

It could be argued that the first time she did it, it was a mistake and was a result of the heat of the moment. But when the action was repeated the referee should have taken some action. This act drew a lot of criticism from various fighters and experts, including the president of the UFC Dana White. On the top of that out of 22 media outlets, 13 scored the fight in favor of Holm. Holm has appealed to the New York State Athletic Commission to review the referee’s decisions, in hopes of getting a fair judgment of the fight and hopefully overturning the decision of the match.

All of this has lead to a lot of people saying that there should be a rematch between the two. But did Holm deserve a title shot in the first place? She was on a 2 fight losing streak and had never competed at featherweight in MMA. The only reason she was selected was because of the fact that she was the only available draw. Now she is on a 3 fight losing streak. If she gets another crack at the belt it will degenerate the value of the belt.

de Randamie however has been very open to the rematch. She has gone on to say that the blows were unintentional and that she would never do such a thing. But when “the Iron Lady” was asked when she’ll be facing Cyborg, she said that she required a surgery to recover from an injury from her fight against Larissa Pachecho, whom she fought back in March 2015.

This has lead to her being labeled as someone who is running from Cris Cyborg. What will happen is yet to be seen. Will we see a rematch? Will the decision of the fight be overturned? Will Cyborg get her deserved shot?

Legitimacy of the division:

When the women bantam weight division was formed, the UFC had two clear contenders in Cat Zingano and Miesha Tate, they even had the opportunity to get the biggest names in the division. But for the feather weight division the UFC doesn’t really have that many options. The division is very shallow, so the number of fighters available are at a bare minimum. And on  top of that almost every major name at 145, apart from Cris Cyborg and Megan Anderson, is with Bellator. In fact long time division runner up, MMA legend and pioneer, Marloes Coenen will clash against  kick boxer and long time MMA contender, Julia Budd , in the main event of Bellator 174 on march 3, 2017 to crown the inaugural Bellator women’s featherweight champion.

After Cris Cyborg and Megan Anderson, the top names of the featherweight division are: former Strikeforce champion Marloes Coenen, BJJ world champion Talita Nogueira, Canadian kick boxer and Muay Thai world champion who also holds a win over Cris Cyborg in kickboxing, Jorina Baars. Guess what ,all of  these fighters are signed up with Bellator.

What UFC right now has is Cris Cyborg, Holly Holm and Germaine De Randamie. They can look at Invicta FC for featherweight fighters but honestly for the experience and talent usually expected by UFC only Megan Anderson, Charmaine Tweet and Latoya Walkers will be able to make it in there.

As for the rest of the fighters I doubt they would want to step up because moving up to the feather weight division means eventually ending up on the wrong side of the cage against Cris Cyborg. It is a high risk low reward move.

The fact that the UFC doesn’t have access to most of the current top feather weights would lead to the conclusion that there is a lack of availability of immediate title challengers but the reality is otherwise. The biggest female name in MMA today is Cris Cyborg. She is beyond doubt not only the No. 1 rank feather weight but also the pound for pound best woman combatant. As soon as it was announced that Holly Holm will be meeting Germaine de Randamie to crown the inaugural women feather weight champion everyone knew that the winner will find herself against the current Invicta FC featherweight champion. Having Cyborg compete for the belt will add a lot of credibility to the UFC featherweight title. Germaine de Randamie said that she will not be competing anytime soon as she has to get a surgery to repair torn ligaments.  Now that Cris Cyborg has been cleared by USADA  we can expect a match between the Dutch Kick boxer and the Brazilian striker.

In the meanwhile the division has already has seen the rise of a hot prospect, Australian boxer and the second half of the Invicta FC featherweight title, Megan Anderson. For now, Anderson hasn’t been approached by the UFC but we might hear the news any time now. Megan Anderson is the only prospect in the featherweight division who isn’t signed up by Bellator. The 26-year-old holds a record of 8-2, with wins over the Ultimate fighter 18 contender Peggy Morgan and former kickboxing world champion Charmaine Tweet. Anderson has gained huge popularity and is arguably the biggest name in the featherweight division after Cyborg. After Cris Cyborg she is the clear contender for the UFC featherweight title.

Once this mess gets sorted out the division will be left with a vacuum. As stated above most top featherweights are in Bellator , therefore the options left for the UFC are bare minimum. But there are fighters who can still fill the vacuum. The number one choice should be Cindy Dandois.

Dandois is arguably one of the most underrated women MMA fighters. Holding a decorated record of 8-2, with wins over MMA legend Marloes Coenen, Muay Thai world champion who also happens to be one of the 2 combatants to defeat Cris Cyborg, Jorina Baars, and current hot prospect Megan Anderson. But despite all of this Dandois has never really gained mainstream attention and has been a perpetual contender. She is also one of the few women at 145 who hasn’t faced Cyborg. If the UFC has any plans to continue the division for a long term, signing up Dandois is a must.

For now UFC can also sign up divisional standouts like Charmaine Tweet, Latoya Walkers and Arlene Blencowe. Lightweight fighters like Jozette Cotton and Bobbi Jo Dalziel too have made their intentions to move down, to featherweight known. These fighters can be valuable assets to the UFC featherweight division for now. As for prospects, apart from Anderson there aren’t really many. For future we can maybe see a run by two time Olympic Gold Medalist Kayla Harrison, undefeated at 4-0 Helena Kolesnyk and Irish Sinead Kavanagh. All three are extremely talented and if given proper exposure they can evolve into talented MMA fighters.

Honestly creating the feather weight division makes no sense whatsoever. The division barely has fighters. Even if you ignore the facts: that most top fighters are with Bellator; that most of the prospects suggested manage to live up to the hype around them and that all the negotiations will be able to go smoothly you have a total of 16 to 17 fighters. The number is scarily low.

You need at least 20 to 25 quality fighters to successfully run a division. The featherweight division doesn’t have 10 quality fighters much less 20  fighters. The division on top of that is divided between UFC, Bellator, Invicta FC and regional promotions. For a division that shallow it will be impossible for any promotion to call it’s belt a world championship. According to most the feather weight division was created for Cris Cyborg. But anyone who closely follows the sport knows that this notion was wrong. The belt was created so that UFC could successfully have a super fight rematch between Holly Holm and Ronda Rousey. Dana White himself went on to say that they were working on Holly Holm vs. Ronda Rousey 2, a super fight. In a perfect world Holm would have walked out with her hand raised against Germaine de Randamie and Ronda would have defeated Amanda Nunes at UFC 207. But just like Nunes, reality hit everyone hard as both Holm and Rousey didn’t walk out with their hands raised.

By the looks of it Cris was plan B. If Rousey and Holm were to lose then Cris could be pushed to a title shot. The plan too would have failed as Cyborg was flagged by USADA but now that she is clear she can take over. However by the looks of it Germaine de Randamie isn’t really keen on stepping in the octagon  against the pound for pound queen. So an entire division, which was barely started, might find itself on a indefinite halt.

Putting it in simpler words both of UFC’s plans have failed and now they find themselves with a mess which they probably won’t be able to deal with. UFC will have to invest a lot for little or no return. The only hope they are left with is that Cris Cyborg gets the title shot which she thoroughly deserves and that she can knock out the mess, in the process saving UFC a lot of time and money. But till then UFC will have to take every blow, which might even lead to the folding of the division.