UFC Women’s Flyweight: A division waiting to be unleashed 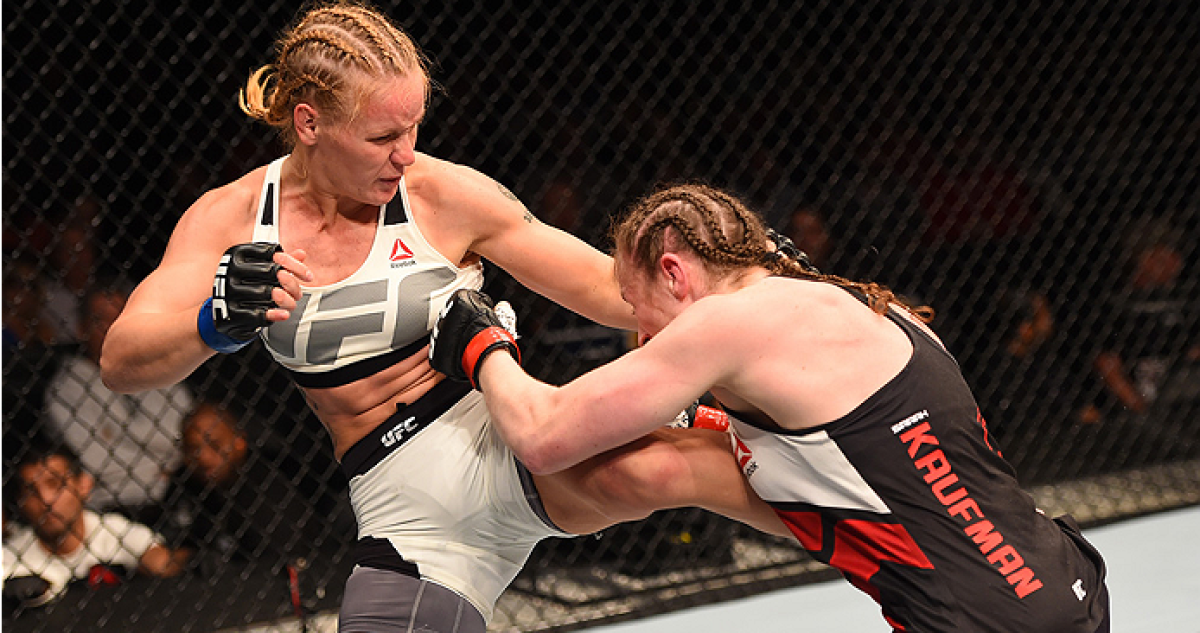 Back in the day, UFC president Dana White had infamously proclaimed that women will never fight inside an octagon. Since then the world’s premier fight promotion has come a long way. It launched it’s first women’s division in 2012. Women’s MMA continued to rise as fans even got to witness the era of Ronda Rousey. The judoka seemed to be invincible and was looking to stake her claim on being considered the greatest women’s combat sports athlete of all time.

There are currently three women’s divisions: Straw weight, Bantamweight and the newly inaugurated Featherweight. When the 145 pounds division was unveiled, fighters and fans alike criticized this development, as currently there aren’t many female featherweight fighters in the promotion. It’s widely believed that the UFC created the 145 pounds division solely to satisfy Cris Cyborg’s desire of ruling over a weight class in the octagon.

Both fans and pundits alike started clamoring for the fourth division: flyweight. However, White instantly shot down the idea of a fourth women’s division. UFC fans instead got their first taste of women’s flyweight at UFC Fight Night 89, when Joanne Calderwood defeated Valerie Letourneau. It was a barn burner of a match with elite, high-level striking on display. Calderwood managed to get her hand raised in the end due to a TKO victory.

The 125 pounds weight-class is the need of the hour in the UFC’s women’s MMA. Many bantamweight fighters such as Valentina Shevchenko are a bit small and less powerful for the 135 pounds division, whereas many strawweight fighters such as Bec Rawlings are a bit large for 115 pounds and experience trouble in cutting weight. Thus, all such women can move up to flyweight for the amelioration of their UFC careers.

In this article we are going to take a look at fifteen fighters, who we believe can be a part of a potential female flyweight division of the UFC.

Shevchenko is a legendary Muay Thai kickboxer with an MMA record of 14-2. She currently has had only four fights inside the octagon. However, due to her brilliant performances against top contenders, ‘Bullet’ has already potentially secured herself a title shot.

Even though, ‘Bullet’ has enjoyed much success at 135 pounds, she is certainly an undersized bantamweight. She has utilized her precise and calculated striking and clinch work to defeat much bigger opponents such as Holly Holm. However, “Bullet” is usually on a disadvantage as her bantamweight opponents are much bigger in size than her.

“Bullet” will soon challenge Amanda Nunes for her bantamweight title. Though, “Bullet” can also be the face of the UFC’s women’s flyweight division. She has the potential and the skill to be a two-weight UFC champion.

Speaking of potential two-weight UFC champions, the current straw weight queen is certainly a prime candidate for being a two division women’s champion. The polish kick boxer has been the most dominant 115 pounds champion in the UFC. She currently has four successful title defenses under her belt and intends to break Ronda Rousey’s record of most successful title defenses in women’s divisions.

The American Top Team member has often stated her desire of becoming a two-weight champion in the UFC. She has already conquered and defeated all available opposition at 115 pounds. Thus, she can effortlessly transition to 125 pounds to win the title.

Dern is a BJJ maestro and is trying her best to excel in the sport of MMA. The BJJ black-belt is still a rookie MMA fighter and currently fights for Legacy Fighting Alliance. She has a flawless MMA record of 3-0. However, the American has been experiencing difficulties with weight-cutting. Thus, she might feel more at home as a flyweight.

Dern is an exciting, up-and-coming prospect. UFC president has revealed that the UFC is interested in signing her. If the company decides to unveil a women’s flyweight division then Dern can be one of the top fighters in the weight class.

The former Muay Thai champion won the only women’s flyweight fight inside the octagon. Calderwood has an MMA record of 11-2. She also has notable victories over Valerie Letourneau and Seohee Ham. The Scottish combat sports veteran is currently one of the best women’s flyweight fighters in the UFC. However, even though a natural flyweight; she is still forced to fight at 115 pounds. Thus, her UFC career could certainly benefit a lot by the inception of a 125 pounds division for women.

‘Rowdy’ Rawlings has an MMA record of 7-6. The Aussie was once touted to be the next big thing. However, she is still to find her feet in the UFC. ‘Rowdy’ has a record of 2-2 in her last four fights inside the octagon. She lost her last fight to top contender Tecia Torres via unanimous decision.

Rawlings has always been a very vocal supporter of many fighters’ demand of creating a 125 pounds division for women. She is still to find success at 115 pounds. Hence, to salvage her UFC career ‘Rowdy’ might switch to flyweight.

Before joining the UFC, Eye was one of the best female flyweights on the planet. She had a phenomenal 10-1 record while competing at flyweight. Everyone including Dana White was in awe of her splendid striking and solid takedown defense. She was destined to be a star. However, unfortunately for her UFC doesn’t have a female flyweight division. Thus, ‘Evil’ was forced to compete at bantamweight.

Her move up to 135 pounds has been disastrous. She has only won a single fight and is currently on a four fight losing streak. She could soon get cut-off from the roster. Though, she can again find success as a flyweight.

Kish is an American-Russian mixed martial artist with a decorated kickboxing career. The Kenpo Karate black-belt currently has an MMA record of 6-0. She made her MMA debut in 2010 as a flyweight. Since joining the UFC, she has been forced to cut more weight to compete as a straw weight.

Kish is still to face defeat in her octagon career. However, she has faced constant troubles in making weight. Kish even missed weight in her last fight against Ashley Yoder. Accordingly, Kish can surely fulfill her immense potential at flyweight.

Macedo is a young, up-and-coming fighter with an MMA record of 5-1-1. The Venezuelan made her octagon debut last year in a fight against Ashlee Evans-Smith. She lost her debut fight in the UFC via third round TKO.

The twenty-one year old is 5’3” tall and is a highly undersized fighter at bantamweight. Though, she has experienced troubles in cutting her weight down to 115 pounds. Thus, she has been forced to fight at 135 pounds. It would be unfair for her to take unnecessary losses against much larger opponents. Hence, we would likely see her full potential if a flyweight division is created.

Nakai is an MMA veteran and has fought for various different MMA promotions around the globe. The Japanese has a phenomenal MMA record of 19-2. Both her career losses came inside the octagon. She was first trounced by former women’s bantamweight champion Miesha Tate and was later vanquished by Leslie Smith.

It should be noted that Nakai is just 5’1” tall and was an immensely undersized bantamweight. She has always been a natural flyweight and is still invincible at 125 pounds. She can certainly be one of the top contenders if the UFC opens its doors to a flyweight division.

The Brazilian is the current Invicta flyweight champion. She has an MMA record of 14-4-1 with notable victories over Vanessa Porto, Roxanne Modafferi and Jessica Andrade. The Chute Boxing Academy member is currently riding high on a five fight win streak and is looking to continue her dominance at 125 pounds.

She holds the most prestigious women’s flyweight title in MMA. It makes her the best female flyweight on the planet. Thus, if the UFC gives the green light to the creation of a flyweight division, fans can expect Dana White to sign the exciting Brazilian.

Porto is an MMA veteran with a record of 18-7. She is one of the best female flyweights on the planet. The 33 year old is a great fighter who constantly finds herself in title contention, though she has always fallen short and has been unable to claim the title. In her previous fight, she was defeated by Maia to win the interim Invicta flyweight title.

Porto is still a top female flyweight and the UFC might be interested in signing her. If the UFC comes calling, Porto could surely switch Invicta for the world’s premier fighting promotion.

‘Roxy’ has since established herself as a top flyweight. She challenged Maia for her flyweight title. However, the American lost a highly close, back-and-forth fight via split decision. She might have failed in her previous run in the UFC as a bantamweight, though she can surely have a successful run in the octagon as a flyweight.

Lee currently fights in the flyweight division and is signed with Invicta FC. She is a highly talented fighter with phenomenal striking ability. She is currently on a two fight win streak which has helped her in securing the inaugural LFA women’s flyweight title.

Lee is a relatively young fighter with buckets full of talent and potential. She has a thrilling fighting style which can help her in becoming an instant fan-favorite inside the octagon.

“The Monster” is also a veteran of the sport and holds a record of 11-6. She holds notable victories over Andrea Lee and the UFC women’s bantamweight champion Amanda Nunes. In her previous fight, she successfully made her Bellator MMA debut and is riding high on a four fight win streak.

The American is a prestigious flyweight and can make her mark in the UFC’s flyweight division.

Do comment and share your opinion about who you feel can be a top female flyweight inside the octagon.