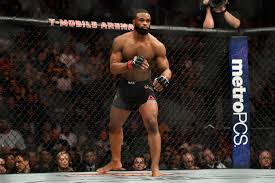 On Wonderboy vs Till

Tyron Woodley recently called Wonderboy a ‘gatekeeper’ while also admitting that he was a very difficult puzzle to solve. Woodley also predicted that Wonderboy would make light work of rising star Darren Till.

“He’ll do all my light work for me. All the dudes that think they want a shot at the strap, they’ve got to go through him, and ain’t nobody do it yet. I think Thompson (will win) man, to be honest. I know I’ve talked a lot of trash about Thompson, more in light joking. But Thompson is a very difficult puzzle to figure out. And it took me a lot of time, a lot of money, a lot of training partners to figure him out.

“I just don’t think Till has what it takes to take him out. With that said, I’ve got to go with ‘Wonderboy,’ even though he’s never said I was going to win a fight. But I’m just going to be a real guy and be honest: I think he’s going to win.”

Thoughts on Usman vs Ponzinibbio

The fight between Kamaru Usman and Santiago Ponzinibbio involves two unheralded contenders with longest active win streaks in the stacked welterweight division. Woodley calls the intriguing matchup a ‘toss up’. “I think Usman’s probably going to do his thing against Ponzinibbio,” Woodley said. “Ponzinibbio is tough, though – crazy striker, really big for the weight class, a lot of punches thrown with cruel intent. It’s hard to say (who will win) in that fight.”

On Dos Anjos vs Covimgton

A fight between Dos Anjos and Colby Covington is reportedly in the works for UFC 224. Woodley admits that the decision of Dos Anjos to not wait for a title fight suprised him. “RDA or Queefington (Covington)? That’s a tough fight to say,” Woodley said. “RDA, I don’t know why he’s even taking the fight. He could have fought me next. A roll of the dice. I told him I could fight in July, so if he want to fight this fight in between in May and risk getting passed up on his title shot, then that’s his bad.”

It is for certain though that the UFC Welterweight Division is in for some interesting few months.

Previous articleWWE: Confusing rules of Louisiana Boxing and Wrestling Commission will not affect WrestleMania
Next articleWWE: Ric Flair to undergo another surgery