Top UFC featherweight contender Yair Rodriguez has been cut from by the UFC for refusing to take the Aug. 4 Staples Center PPV fight against Zabit Magomedsharipov. Yair Rodriguez has not fought since losing to Frankie Edgar at UFC 211 on Stipe Miocic vs Junior Dos Santos exactly one year ago.

Prior to that setback, Rodriguez’s first six UFC wins included four bonuses, including three straight for stoppages of Andre Fili and UFC Hall of Famer B.J. Penn, and a decision over Alex Caceres. 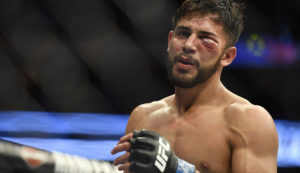 According to notable MMA and Boxing Journalist Lance Pugmire from LA Times, Dana white has cut Yair Rodgriguez from UFC as he has turned down a fight against Zabit Magomedsharipov and previously against Ricardo Lamas.

The @latimes has learned that Yair Rodriguez has been cut from by the UFC for refusing to take the Aug. 4 Staples Center PPV fight against Zabit Magomedsharipov.

Told by @danawhite that if a fighter like Rodriguez turns down both Ricardo Lamas and Magomedsharipov, in what should have been a compelling battle, after taking a year off, he can take his act elsewhere.

A letter to Yair Rodriguez stating that he has been cut from the UFC has been sent to him, according to LA Times.

The letter to Rodriguez informing him he's been cut has been sent out, @latimes has been told.

It’s unclear as to why Yair Rodriguez turned down a fight against Zabit Magomedsharipov, many consider him to be the next big thing in UFC, hailing from Dagestan, Magomedsharipov (15-1) is on a three-fight winning streak in the UFC, having already defeated names such as Mike Santiago, Sheymon Moraes, and most recently a Fight of the Night performance against Kyle Bochniak. Outside of the Octagon, the 27-year-old had another eight straight wins before signing with the UFC.