UFC: Yair Rodriguez has pulled out of his UFC 228 bout against Zabit Magomedsharipov

UFC 228 PPV card has taken a massive hit as Mexican bantamweight contender Yair Rodriguez has pulled out of his fight against feared Russian contender Zabit Magomedsharipov.

The fight was scheduled to take place in American Airline Arena in Dallas, Texas. This is a fight fans wanted to see for a long time but with Yair pulling out of the fight because of sustaining an injury, the UFC is actively searching for a replacement opponent. 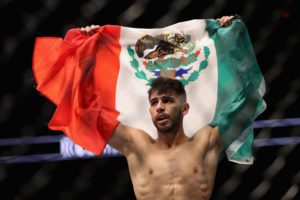 Yair last fought in May of 2017 where he was destroyed by former UFC Lightweight champion Frankie Edgar and many fans thought that it was a quick jump in class for him.

Meanwhile, Zabit Magomedshairov has won all three of his UFC bouts in decisive fashion. He last fought against Kyle Bochniak where he defeated him via unanimous decision.

The news was first reported by MMA Brasil:

UFC 228 is headlined by Tyron Woodley and Darren Till, with Nicco Montaño defending her flyweight belt against Valentina Shevchenko in the co-main event.