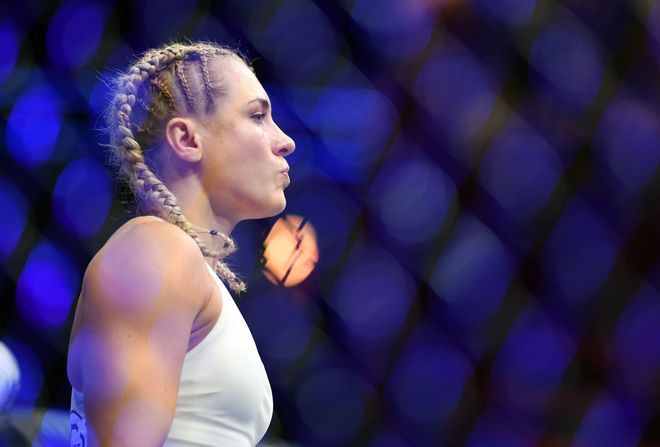 After suffering a loss to Cris Cyborg at UFC 222, Yana Kunitskaya is eager to bounce back.

The main event fight against Cyborg marked the Russian’s debut in the UFC. Kunitskaya had taken the fight against Cyborg on short notice after the original UFC 222 Main event between Max Holloway and Frankie Edgar was called off due to an injury that Holloway suffered. After enjoying a good start in the fight, Kunitskaya succumbed to the pressure of Cyborg and conceded a first-round TKO defeat.

In a post-fight interview with MMA Junkie; Kunitskaya revealed that she was nervous during the whole debacle.

“It was a weird experience. I was so nervous, and I hope to come back as fast as I can. It’s why I’m so sad because I feel I can control this fight at some points. But what happened, everyone saw,” she said.

Before her venture into the UFC, Kunitskaya had captured the Invicta Bantamweight Championship by defeating Raquel Pa’aluhi. And it was apparently this win that landed her the short notice title fight against Cris Cyborg.

In order to fight for the title, Kunitskaya had to move up to Featherweight. Her last fight in the weight class prior to UFC 222 happened in 2012. Now that her return to Featherweight turned into a forgettable affair, Kunitskaya is looking to drop back to Bantamweight.

Despite the defeat, the Russian has reasons to be happy about. She earned a huge pay-day at the event as she went home with a disclosed purse of $100,000 which is very high compared to her recent outings in Invicta Fighting Championships.

Also, the title fight with Cyborg was only her first fight in the UFC and the promotion is likely to offer her more fights in the coming months. The 28-year-old currently holds a professional record of 10-4 to her name and still have many more years in her career.