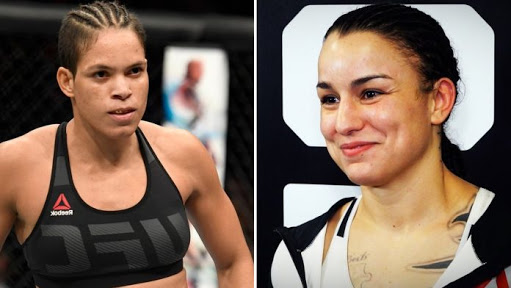 UFC Women’s Bantamweight Champion Amanda ‘The Lioness’ Nunes(15-4) will put her bantamweight title on the line for the third time as she meets Raquel ‘Rocky’ Pennington (9-5) at UFC 224 in Rio de Janeiro on May 12,2018.(via Twitter):

The bantamweight title is on the line in May! 🏆@Amanda_Leoa takes on @RockyPMMA in the main event at #UFC224 in Rio! pic.twitter.com/yB8Gu4BEzJ

Nunes has successfully defended the belt twice inside the octagon.First at UFC 207 on December 30,2016,when she face former UFC Bantamweight champion and a pioneer of women’s MMA in Ronda Rousey.Nunes blasted through Rousey beating her in just 48 seconds of the very first round via TKO.

However the next hurdle in her way was not an easy one as she faced former Muay Thai champion Valentina ‘The Bullet’ Shevchenko.They were slated to fight at UFC 213 but Nunes pulled out from the card just a day before.The fight was rescheduled to UFC 215 where Nunes defeated Shevchenko via a razor thin split decision.Many thought Shevchenko won that fight.It was 2-2 unti the fifth round wherein Nunes secured a takedown and maintained top position on Shevchenko to take the title home.

Pennington on the other hand(9-5 and 6-2 in the UFC) has been on a tear winning her last 4 fights,one against the former Bantamweight Champion Miesha ‘Cupcake’ Tate who also coached her at the Ultimate Fighter 18.Pennington’s only setbacks inside the octagon have been very close split decision losses against formidable competition like former Bantamweight champion Holly Holm and former Strawweight Title challenger Jessica Andrade.

Nunes and Pennington were slated to fight before but Pennington needed some time to recover from an injury.