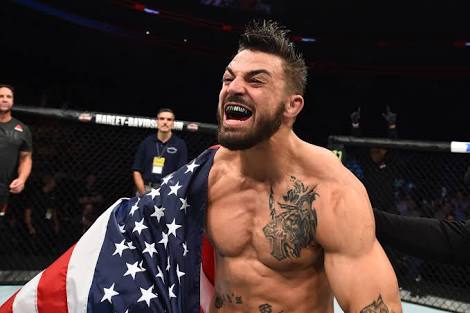 Following his loss, members of the highly acclaimed American Top Team at Coconut Creek, Florida came forward to invite the welterweight to their camp in order to help him round out his game.

If you remember, Perry was also coming off of a unanimous decision loss to Santiago Ponzinibbio heading into the Mac Griffin fight.

However, things once again did not go Perry’s way as Griffin used footwork, elusive boxing and an astute gameplanning to out point him.

As highlighted so harshly by Colby Covington, the lack of a proper head coach in Perry’s corner did show in the way he’s performed in the last couple of fights.

As such, it looks like ATT coming forward to absorb Perry into their team would be a wise move for both parties involved.

I wouldn’t mind welcoming @PlatinumPerry to @AmericanTopTeam in fact I would encourage it.. @DinThomas 🧐 https://t.co/j45kDs7N8d

Phil Daru is the Strength and Conditioning coach at the American Top Team, who said that he would encourage Perry to join ATT and asked the option of Former UFC Lightweight Din Thomas, who is also associated with the camp.(via Twitter):

I tried to holla at @PlatinumPerry a year ago. I've been down with him since back in the day. He know I F with him. https://t.co/XhgaVLNY2m

Perry found some success in the grappling department in the fight, as he was able to take Griffin down in the first round.

Perry recently mentioned that he has good wrestling but does not use it as he wants to put up a good stand up fight for the fans.

However, high-class wrestlers like Colby Covington, Tyron Woodley and also high-quality coaches like Din Thomas and Former WEC Featherweight Champion Mike Brown, to name a couple, would give Perry the input he needs to prosper at the highest level.