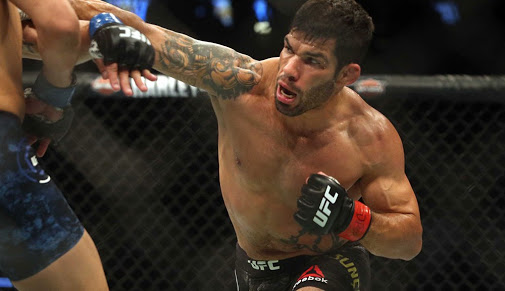 UFC Bantamweight prospect Raphael Assancao(26-5) has been stacking up victories and yet has not been getting the recognition he deserves.He has an impressive record of 10-2 in the UFC.

So everyone is talking their but off… and have fights lined up not me but can wait on “Indefinitely” come on @DominickCruz let’s keep the game going and @Cody_Nolove earn your shot UNLIKE the first time, #earnit @ufc @UFCONFOX @FS1 #Chiponmyshoulder #respect

Assancao is on a three fight win streak with victories over #8 ranked Aljamain Steeling and #5 ranked and former WAOF Bantamweight Champion Marlon Moraes.Assancao then faced Denver product Matthew Lopez at UFC Fight Night 120 in November 2017 in Norfolk,Virginia.Assancao wanted to make a statement to establish his case for the title.After two close rounds,Assancao knocked Lopez out with an overhand right to grab his tenth win with the UFC.

Assancao also had some words for Former Bantamweight champion Cody ‘No Love’ Garbrandt who lost his title to Dillashaw at UFC 217 just before hhe week when Assancao faced Lopez.Garbrandt tagged Dillashaw at the end of the first round however Dillashaw regained his composure to land a lead hook on Garbrandt,winning the title via TKO.

Garbrandt is on his quest to earn his title back by calling out Dillashaw.Assancao therefore said to ‘earn his title shot unlike the last time’.Garbrandt also responded with a tweet that he has achieved more in a year than Assancao has in his whole career.(via Twitter):