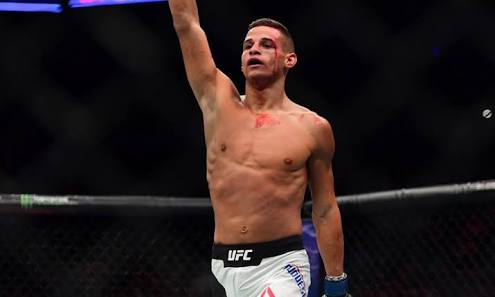 UFC Bantamweight prospect Tom Duquesnoy(16-2-1 MMA,2-1 in the UFC)registered a victory against Terrion Ware(17-6) on the main card of UFC fight night 127 held on March 17 at O2 Arena in London.

Duquesnoy came in with a lot of hype as being the two weight champion in BAMMA.Duquesnoy described his victory in detail at the UFC Post-fight Press Conference.(via YouTube):

When asked bout how he felt about his performance Duquesnoy said,”It was a tuff fight.He(Ware) was strong,well prepared,tuff,good chin and it was an honour to fight against somone who was very ready,he gave me a lot of problems and certainly forces me to work harder for the next fight.”

Duquesnoy with 12 of his 16 wins as finishes,is known as a finisher.However when asked about his decision victory he said that he’ll analyse the fight with his team and see what went wrong and what went right,is glad about certain things but would certainly work on other things.

Judging looked a little contradictory to what people might think usually in this bout where a judge gave all the rounds to Duquesnoy(30-27).When asked about ihiw confident he was while the decision was pending,Duquesnoy said according to him he definitely won espite being a close fight.

As Duquesnoy fights out of France and MMA is still illegal in France,Duquesnoy was asked about any update regarding this issue.Duquesnoy said,”Actually with the change in Government,the Democrat Government,it is a new government with new people over there.It is our vest way to legalise things and things are certainly moving in a positive direction.”

Duquesnoy added,”I’m walking hand by hand with the UFC through seminars and conferences to develop it.Giving good image of MMA,how it improved my life and that was a occasion for me to realize my dreams so with seminars and conferences,I’m trying to explain this to people If you go deep in France,you’ll see that people on a Sunday afternoon,around hundred people attend my seminar,it’s getting huge.”

Duquesnoy concluded by saying that,”We are good in martial arts,Judo and Boxing,during Olympics we’re always at the top so it will definitely happen just those administration things take a lot of time.”