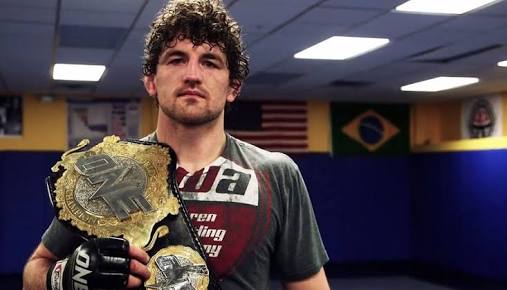 Askren is still linked to the sport as he trains and works as a wrestling coach at Roufusport in Milwaukee,which also serves as a training ground for current Welterweight Champion Tyron Woodley.He also has a lot of wrestling academies.

Askren recently posted a tweet saying it ‘ridiculous’ that the UFC have booked an interim title fight between former Lightweight champion Rafael Does Anjos(28-9) and #3 ranked Welterweight Contender Colby Covington at UFC 224.(via Twitter):

Giving an interim at WW is so ridiculous. @TWooodley only been out 8ish months and defended 4 times in 12 months prior https://t.co/hgSNMbomhA

Askren said that his teammate Tyron Woodley has only been out for wight months and has defended the title three times in last eight months.Woodley himself said in his chat at UFC Tonight with Daniel Cormier that if he is not ready to fight in July(that would be one year from the last time he fought) and if he does not show up,striping him from the title could be a possibility.

UFC’s interim title saga began from UFC 189 in July 2015 when Chad Mendes replaced the injury then champion Jose Aldo to face Current UFC lightweight champ Conor McGregor. McGregor won the fight via second round TKO to become the interim featherweight champion of the world.McGregor then won the belt from Aldo only to ve to the lightweight division.At UFC 200,Aldo fought Edgar for the interim featherweight belt,he won the fight and was then unified as the undisputed champ after McGregor was stripped off the title.In December 2016,Max Holloway fought Anthony Pettis for the interim Featherweight belt,Holloway won the fight via TKO in the 4th round.

Lightweight division had the similar story as interim title fight was set between Khabib Nurmagomedov and Tony Ferguson.The fight was scraped as Nurmagomedov missed weight.Nurmagomedov failing to recover was replaced by Kevin Lee at UFC 216.Ferguson won the fight via submission in the third round to become the interim champion.Ferguson and Nurmagomedov are again booked to fight at UFC 223,however Dana White said the winner would be crowned as the undisputed champ.

At Middleweight,Robert Whittaker fought Yoel Romero at UFC 213 while then champion Michael Bisping was injured.At UFC 221,Romero fought former champ Luke Rockhold for the interim belt as well.Romero won the fight via KO in the third round,however was not crowned the champ as he missed weight.

UFC News: Ben Askren claims he can beat both Nate and Nick Diaz on a single night

UFC:Robert Whittaker vs Yoel Romero set for UFC 225 in Chicago,Whittaker gives his prediction regarding the fight