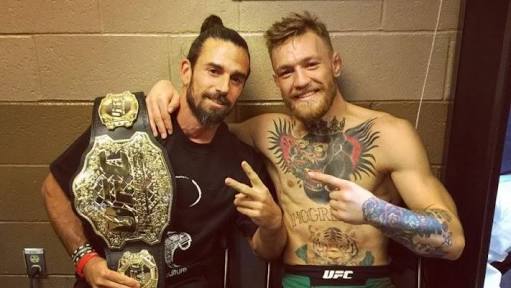 Ido Portal has trained many MMA fighters and Muay Thai fighters and has been along since a while but the inclusion of Conor McGregor in his training facility has definitely boosted up his brand.The Notorious one’s notoriety recently made his Jiu Jitsu training partner Dillon Danis’s MMA debut at Bellator 198 in April a much anticipated one.

Current UFC Welterweights Gunnar Nelson(16-3-1) and Alberto Mina(13-0) and UFC Lightweight Lando Vannata(9-2-1) are few of the many names training under Ido Portal.

So what is ‘Movement Culture’?-As per the definition of Portal-Movement Culture represents a contemporary paradigm shift in physicality, moving us away from main culprits in movement and fitness as well as the separation between health, aesthetics, performance and art.

Basically it enhances motor coordinations(combinations of body movements that results in actions).This type of training helps in increasing balance and footwork while striking.Movement training involves usage of many equipments like ropes,Gymnastic ropes,etc.(via YouTube):

As per Portal’s career in MMA is concerned,him being with no amateur experience makes his chances of getting signed by a bigger organization like UFC significantly less,however he can definitely fight on smaller,regional cards.

Portal met the Afro-Brazilian Capoeira at  age of fifteen and got addicted it.Capoeira is an Afro-Brazilian martial art that combines elements of dance, acrobatics and music.

Many Brazilian fighters have a capoeira background, either training often or having tried it before. Some of them are: Anderson Silva, who is a yellow belt, trained in Capoeira at a young age, then again when he was a fighter.UFC veterans Jose Aldo and Andre Gusmao also use Capoeira as their base.