UFC:Darren Till calls out Jorge Masvidal for a fight in May at UFC Liverpool 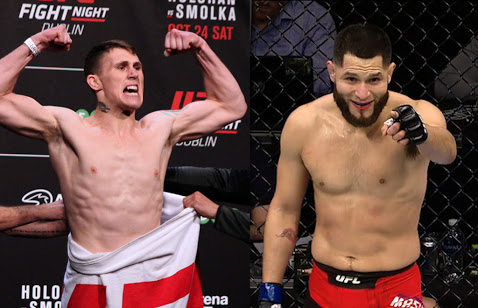 A couple of days before,UFC announced their first visit to Liverpool in May.

The card would be headlined by none other than the scouser on the roaster,one of the most dangerous prospect,undefeated Darren Till (16-0-1).

Till has helped MMA scene in Liverpool explode with his performances.He is a Master in Muay Thai.He moved to Brazil for four years where he learned and got a purple belt in Luta Livre Esportiva,which is a mixture of wrestling and judo,making Till extremely well rounded.Till was around 205 pounds and undergoes a massive 35 pound cut to make 170,which makes him extremely big for the division.

Till has taken the UFC Welterweight division by storm winning last four of his five fights,one being a draw.Even though,Till has been around since 2015,he gained recognition in his last fight when he faced former two time Lightweight title challenger Donald ‘Cowboy’ Cerrone in October at UFC Fight Night 118 in Gdansk, Poland.Fan favourite Cowboy found it insanely difficult to establish his range and handle Till’s power thus losing to Till via TKO in the first round.Till went from unranked to now being #7 ranked welterweight contender.

For his next bout,Till had an eye on various opponents namely the Florida brawler Mike Perry, Gunnar Nelson and Stephen Thompson.However,as the above bouts were not be able to finalise. Thus #7 ranked welterweight Till expressed his desire to fight #6 ranked fighter Jorge ‘Gamebred’ Masvidal.(via Twitter):

Asked @darrentill2 his thoughts on fighting @GamebredFighter. His response: “I’d love to have a tear up with Masvidal. He’s from the old school and is game as fuck. I believe me and him would make a war.“

Masvidal also earned the biggest win of his UFC career against Cowboy via second round TKO in January at UFC on Fox 23 at Denver,Colorado.

Since then Masvidal suffered two consecutive losses against former title challengers.At UFC 211 against Demian Maia and at UFC 217 against Stephen ‘Wonderboy’ Thompson.

Till then later called Masvidal out asking if he can headline the UFC Liverpool card in May.(via Twitter):

@GamebredFighter let’s have a tear up in #UFCLiverpool if your not busy ?
🙌🏻🦍

Masvidal who recently finished the shoot of a movie would like to get back to winning ways and get back to title contention.(via Twitter):

July free as can be homie https://t.co/zM9jb5Q8WU

UFC:UFC to visit Liverpool for the first time in May,Darren Till to headline