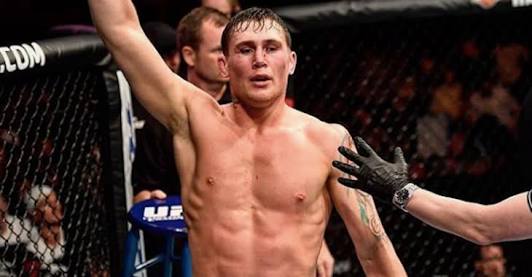 Till’s quck rise to the division has impressed many.Till made his back in May,2015 against Wendell de Oliveira at UFC Fight Night 67 in Goiania,Brazil.Till won the fight via knockout in the second round.Till next faced Nicholas Dalby at UFC Fight Night 76 in Dublin where he battled out a draw with Dalby giving them the Fight of the night bonus.Till unfortunately had to remain inactive for next two years due to shoulder injury and personal issues like divorce with his wife.Till then returned inside the octagon in mid 2017 defeating two welterweight prospects in Jessin Ayari and Bojan Velickovic.However, Till earned his recognition when he accepted a fight on just five weeks notice against UFC veteran,two time title Challenger and fan favourite Donald ‘Cowboy’ Cerrone at Fight Night 118 in Gdansk,Poland.Cowboy was coming off a two fight losing streak against Jorge Masvidal and Robbie Lawler after being on a tear in Welterweight.Till walking around 205 lbs gave former lightweight Cowboy many problems eventually finishing him the first round via TKO.

This victory took the Welterweight division by storm.Till in his post fight interview immediately called out red hot prospect Mike Perry who was in the attendance that night.Till afterwards shifted his attention to Stephen ‘Wonderboy’ Thompson.But Thompson’s father who is also his head coach declined the fight as he thinks iit might be a ‘bad matchup’ for him.(via YouTube)

After a recent battle with Sinusitis, Till in his interview with MMAFighting.com said that he’s ready to return in action action against RDA.He further added,

I’ve obviously lived there. I’ve got a lot of fans there, and I can speak the language. It would be a good sell in Brazil, if he’s willing to do it.I know he’s waiting for  Woodley but Woodley doesn’t seem to want to come back.”

Till spent four years in Brazil to focus on his MMA career as he was stabbed in a bar in Liverpool. Till trained under Astra Fight Team and also earned his Purple belt in Luta Lived Esportiva which is a mixed martial art in Brazil which is a mixture of wrestling,Judo and strikes.

Till in his five UFC fights has fought in 5 different countries namely Brzail,Ireland,Sweden,Netherlands and Poland respectively.Till expressed his desire to fight in America if UFC 224 bout against RDA does not materialise.

“The Americans need to see the new breed,” he said.

For potential eye as opponents in America,Till has his eye on Santiago Ponzinibbio, Kamaru Usman and still Stephen Thompson.Though he added, “I think ‘Wonderboy’ is still gonna avoid me.”

Usman does not have a fight and Ponzinibbio is in the running to headline the UFC’s inaugural card in Santiago, Chile on May 19.