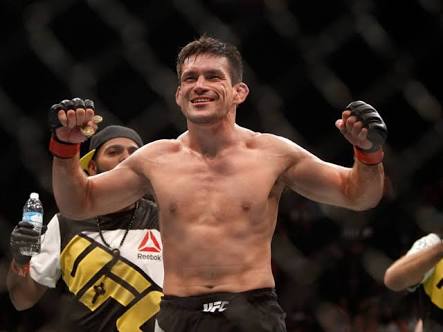 Demain Maia(25-8) is considered by many undoubtedly as one of the best if not the best Jiu Jitsu practioners to ever compete in the sport.Maia is a former two time title challenger both at Middleweight and Welterweight division.

Maia however hasn’t been active since last October.Maia was on a tear with a 7 fight winning streak against top welterweights including former UFC Welterweight Interim Champion Carlos Conditions,Gunnar Nelson,Neil Many and Jorge Masvidal. After defeating Masvidal via razor thin split decision, Maia was given his title shot,but is on a two fight losing streak since again UFC Welterweight Champion Tyron ‘The Chosen one’ Woodley and #3 ranked title contender Colby ‘Chaos’ Covington.Maia would love to comeback to winning ways this May.

Maia in his chat with Combats said,“Has it really been that long? Just yesterday my wife told me I didn’t even look like a fighter anymore. I don’t even spend time in the house, I do a lot of stuff. Unlike other fighters, I have 300 different businesses. I want to go back. I’ve been training for a while and I want to come back. My coach has been talking to the UFC, but there’s nothing certain yet. The weight class is quite convoluted now, there’s not a title fight on the horizon or anything. We’ll just have to wait and see.”

Maia as always did not ask for any specific names for his next fight,he did mentioned some fighters he admires inside the octagon.

“There’s some guys in my weight class who I really admire. It’s hard to say, but guys like Donald Cerrone and Robbie Lawler have been around since forever, just like me. It doesn’t matter who I fight next, the only important thing is to win. That’s what I have to pursue.”

With Maia’s desire is to return in May,it can very well be at UFC 224 in Brazil.With Bantamweight queen Amanda Nunes vs Raquel Pennington and Glover Texeira vs Volkan Ozdemir already booked plus Jeremy Stephens vs former Featherweights Champion Jose Aldo in the works,UFC 224 promises to be an amazing card.

Previous articleThe Butterfly Story – In Conversation with Raja Shippen
Next articleUFC:CM Punk will fight on the UFC 225 card in Chicago