UFC:Franic Ngannou fires back at Derrick Lewis,calls him out for a fight 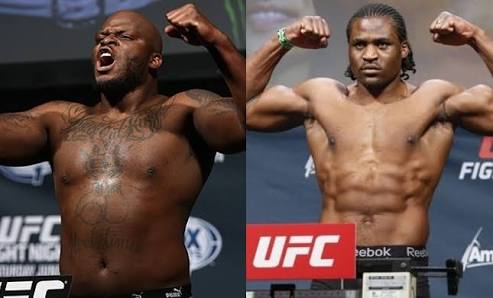 A much anticipated heavyweight slugfest between Francis ‘The Predator’ Ngannou(11-2 MMA,6-1 in the UFC) vs Derrick ‘The Black Beast’ Lewis (19-5-1 MMA,10-3 in the UFC) was always demanded by UFC fans and finally the stars seemed to have been aligned in the right direction for the bout to happen.

Lewis has been going back and forth on Ngannou after his loss in his title shot bout against Stipe Miocic.Champ Miocic dominated Ngannou the entire fight earning him his record making third title defense via unanimous decision(50-44,50-44,50-44).

“My coach just believes that I would really destroy Francis. My coach don’t like Francis at all either. I believe that I’m better than Francis all the way around,” Lewis said in a recent interview with FloCombat. “Striking, grappling, ground game, submission, whatever. I believe I’ve got better conditioning than him. I’m better disciplined. I listen to my coaches. I really believe I could beat this guy.”

Hopefully we can get something before he turns 50 on us,”Lewis said on an episode of the Slip N’ Dip Podcast, shortly after he knocked out Marcin Tybura. “Usually after every fight, I tell them I would like to fight this guy. I always try to pick out the toughest guys that’s out there.I told them Francis, I told them [Alistair] Overeem, even a rematch with Mark [Hunt]. Who’s the other guy, [Curtis] Blaydes and Fabricio [Werdum].”

Ngannou while enjoying his time off in his hom country of Cameroon with friends and family,he ignored all other callouts from Lewis.However,recently after starting back his training,Ngannou responds to those fallouts from Lewis.(via Twitter):

With Current champion Stipe Miocic going for a superfights against UFC Light Heavyweight Champion Daniel Cormier on UFC 226 in June.Lewis vs Ngannou can be an important fight under the context of the situation.

UFC: Daniel Cormier says he is going to ‘show up and do his thing’ against Stipe Miocic