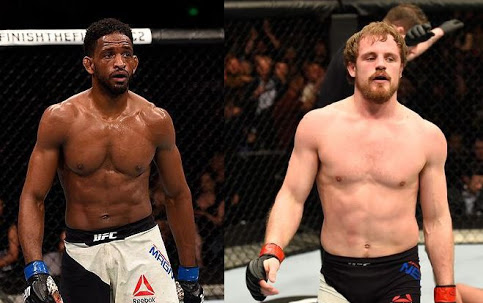 UFC visits the land of the scousers Liverpool for the first time ever on May 27 in Echo Arena.

With a strikers delight between hometown hero #7 ranked contender Darren ‘The Gorilla’ Till and #1 ranked contender Stephen ‘Wonderboy’ Thompson set for the main event,UFC Liverpool card just got better with a striker vs grappler fight being added between #9 ranked Neil Magny (20-6 MMA,13-5 in the UFC) and #13 ranked Gunnar Nelson (16-3-1 MMA,7-3 in the UFC).(via Twitter):

A victory in this co-main event would help the winner establish his case in this stacked Welterweight division.Magny and Nelson in their last fights have not been stacking up victories as per their potential.Magny has been alternating wins and losses with 2-2 in his last 4 fights.However,the two setbacks Magny has,had been against stern competition in former Bellator Welterweight title challenger in Lorenz Larkin and former UFC Lightweight champion Rafael Dos Anjos.

Same has been the case against the SBG Ireland product Nelson.With 3-3 record in his last six fights, he would like to get his streak back on track as well.Nelson faced Santiago Ponzinibbio at UFC Glasgow in July.Nelson came out as a heavy favourite however Ponzinibbio had different plans.Ponzinibbio came out extremely aggressive in the first round knocking Nelson out.The victory was a bit controversial with an eye poke involved that made Nelson’s vision distracted a little further leading to the knockout.However still goes as an L on Nelson’s record.

Magny on the other hand,last fought at UFC 219 in December against former welterweight interim champion Carlos ‘The Natural Born Killer’ Condit.Against all the odds,Magny defeated Conditions via unanimous decision.

Hence Magny has a lot of momentum going into fight.This would be the first time that Magny will fight in the European continent,Nelson on the other hand has fought three of his last fights in Europe only.

Both the fighters would like to get a victory to establish some sort of consistency in this Welterweight digit which is just warming up.

Previous articleWWE: The Rock to compete at WrestleMania this year?
Next articleWWE: Paul Heyman reveals his thoughts about Brock Lesnar vs Daniel Bryan dream match.