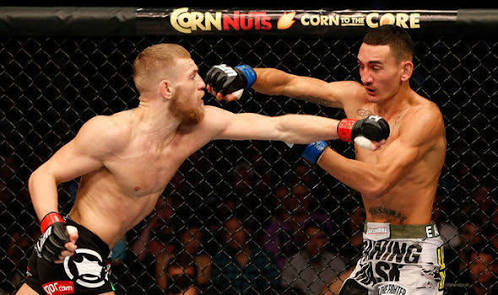 UFC Featherweight Champion Max ‘Blessed’ Holloway finally expressed his views on his twitter back and forth with current UFC Lightweight champion Conor ‘The Notorious’ McGregor.

Holloway and McGregor have been exchanging words via tweets since a while now.However, Holloway won’t allow himself to be bullied by Conor McGregor.

On March 4,Holloway reached out to Edgar after his loss at UFC 222 against undefeated Brian Ortega.(via Twitter):

McGregor then replied with reference to Holloway pulling out from the fight as he was replaced by Ortega.(via Twitter):

Kid, you bounced. Leave it.

Oh we talking bout bouncing now?Don’t like my tweet? Your coach did. Go ask him why. Maybe you'll find what you lost. https://t.co/ekoxh7bUaw

On March 5,McGregor confirmed that he will be featuring in the Burger King advertisement.He posted,”The Undisputed Champ Champ and the Undisputed Spicy Champ.”Holloway mocked McGregor saying,”You went from being king of Ireland to king on ‘chicken’?Looking forward to two strips meal coming April 7.”(via Twitter):

You went from King of Ireland to King of "chicken"? Looking forward to the two strips meal coming April 7.
PS Shout out to the real fighting Irish. The ones who value whats in heart before whats on waist. Hawaii respects you and welcomes you with open arms https://t.co/kqyiAw3PDY

“This guy’s been picking on me. It’s like the school ground when you’re at school. If you ever get bullied, when you get sick of it, you turn around and you punch the bully in the face, and they don’t say anything. That’s what happened. It’s all right. I could not let that slide. I was giving a chance to everyone. No one was doing it, so ‘Blessed’ was going in.”

Previous articleUFC/Boxing: Floyd Mayweather will soon apply for a MMA license
Next articleUFC: Frankie Edgar vs Cub Swanson 2 in the works for Atlantic City card on April 21