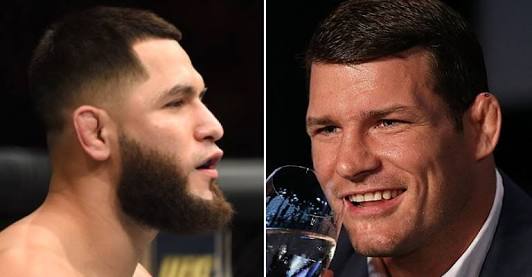 Former UFC Middleweight Champion Michael ‘The Count’ Bisping and #6 ranked Welterweight Contender Jorge ‘Gamebred’ Masvidal do not go well with each other.

It all started while Bisping was in the attendance at UFC 213 where Robert ‘The Reaper’ Whittaker faced Yoel ‘Soldier of God’ Romero for the interim Middleweight title as Bisping was injured.Between rounds,Bisping ripped  a Cuban flag,which is the nationality of Romero.Masvidal being a Cuban as well,felt angered with this behaviour of the champ.Since then Masvidal and Bisping have been going back and forth in hotel lobbies and social media.

Now Masvidal reveals he and Bisping got in an another altercation in Shanghai,China when UFC made it’s first visit there in November. Bisping replaced former Middleweight champion Anderson Silva against Kelvin Gastelum.

In his interview with MMA Mania Masvidal said,”We had another incident actually in China, which not too many people know about. So we were in China and [Bisping] got knocked out by [Kelvin] Gastelum, and I’m not going to fuck with nobody who just got knocked out, especially the way he did. It was like the Holy Ghost left his body, you know?”

“So I see him coming through the lobby, I was with numerous fans taking pictures and so I [turn] my back [to him]. I’m like ‘I don’t even want to see this dude right now’ but I’m not going to just run away either, and leave the fans hanging. I just got back to my hotel and people are forming a line, I’m going to give them the pictures that they want. So I got my back to him and I see him out of the corner of my eye, and I’m trying to like turn away so he doesn’t see my face. Just like a side-profile or something. But he comes right up to my face, sticks his middle finger in my face and starts going ‘fuck you, fuck you, piece of shit, you low-life, you ain’t shit man.’

“[He] starts to walk away, and I immediately lost my shit and I went after him and [UFC VP of Athlete Development] Reed Harris and company got in between us, and the UFC security. He did the whole show and stuff, talking shit while he’s backing up, getting into the elevator… I’m like why do all that when nothing comes out of it you know? You could have just sent me a message and told me hey lets meet at the workout room and talk about this, but he’s just not going to do that, you know?”

“So I immediately send him a message, and I ended up posting it online because he’s such a punk, letting him know ‘man, stop disrespecting me every time you see me, just be man about it. Pick a place and lets go and lets fucking do it like men. Why are we talking? We both can fight to some degree—I don’t think he can fight for shit, but he claims to be a fighter—lets just go and scrap it out. That way we stop flirting with each other online.”