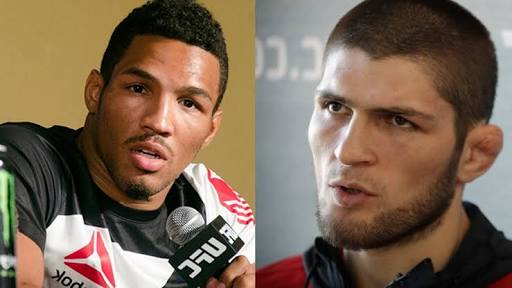 One of the most anticipated card for hardcore MMA fans is around a less than 3 weeks to go.

With the bout approaching,it is natural for both the fighters to engage in conversations or trash talk for promotion of the fight.However, Khabib Nurmagomedov has engaged in some another trash talk with former Lightweight Title Challenger Kevin ‘The MoTown’ Phenom.

Nurmagomedov last fought on the UFC 219 card against Edson Barboza.Nurmagomedov dominated the entire fight and won via unanimous decision(30-25,30-25,30-24) to earn his title shot.

Kevin Lee,while UFC 222 scrums had some words for Khabib as he said that Nurmagomedov “looked terrible” in his performance over Edson Barboza.

“I wasn’t too impressed with Khabib,” said Lee. “I’m gonna do ten times the work on Edson. Khabib looked terrible in that fight. He was just barreling straight forward like a tank.”

Nurmagomedov when asked about the top lightweights in the world in an interview with Megan Olivi he said,”The MoTown Phenom doesn’t have any heart.He wants to be tough but he has very small heart.Very small heart. When he fought with Tony Ferguson, between second and third round, you guys can watch his face and understand everything. Face never lie. His eyes – when Tony Ferguson talks about, ‘This is my night!’ his face agrees with this.”

Lee then responded with a tweet saying,”I actually showed up and made weight through an infection @TeamKhabib.You sign contracts and still find a way to b**** out. FOH”,referring to the staph infecction he got before the fight.(via Twitter):

I actually showed up and made weight through an infection @TeamKhabib. You sign contracts and still find a way to bitch out. FOH https://t.co/WS72wMuXLD

According to Dana White,the winner of this 223 bout between Khabib Nurmagomedov and Tony Ferguson would be named as an undisputed champion thus stripping Conor McGregor off of the belt.

Previous articleUFC: Cris Cyborg feeds 222 cheeseburgers to the needy with reference to her victory at UFC 222
Next articleUFC: Francis Ngannou requests Brock Lesnar to come back