UFC:Khabib Nurmagomedov reportedly getting paid 4 times as much money as Tony Ferguson 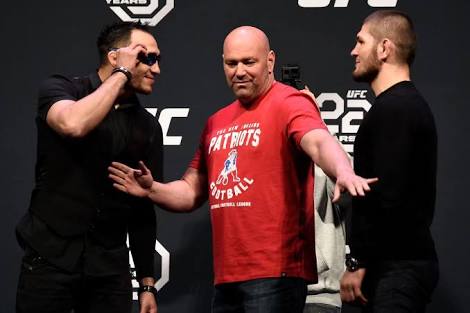 With three years of no MMA(UFC or Bellator) action,fans are craving for this card.The fight is a hardcore MMA fan’s dream as this match up was a long time in the making.The co-main event features a rematch between current UFC Women’s Strawweight champion ‘Thug’ Rose Namajunas and former champion Joanna Jedrzejczyk.In their first outing,dominant champion Jedrzejczyk was expected to steam roll through Namajunas by many but what happened was the exact opposite, Namajunas dropped Jedrzejczyk and then ended up landing a vicious left hook,dropping Joanna and eventually making her tap to strikes.Hence this card is definitely expected to attract tons of fans both in the attendance and on PPV.

However with a big card,comes a big pay day or in the division Champion Conor McGregor’s words a ‘Red Panty Night!’.As per Dana White and many other sources,McGregor would be stripped of the title and interim champ Tony Ferguson would be promoted as the undisputed champion of the world.Ferguson being the champ should get a heavy chunk of money.However, Khabib’s manager,CEO of Dominance MMA management Ali Abdelaziz,has different opinions.

In a recent interview with Kevin Iole,Abdelaziz said his client Khabib will make a whooping four time as much money as the champion.He said,”I guarantee you Khabib will make four times as much money as Ferguson.I can guarantee you that. You can ask even the boss about that. The whole thing is that he’s the draw. He’s the guy making the money. Tony Ferguson, no one is buying his pay-per-view.”

Unlike in boxing,financial pay in MMA is not disclosed completely.However with Conor McGregor expected to be at the attendance and have a staredown with the winner,a lot of fans would be expected to tune in.Will you?

UFC: Ferguson says Khabib not ready for him