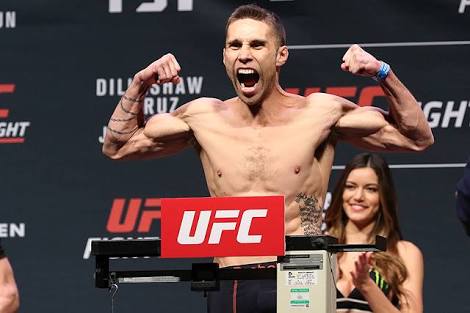 Bochniak is coming off a win against Brandon Davis at UFC 220 in January whereas Magomedsharipov won his last fight vs Sheymon Moraes in November.

On his last fight vs Davis,Bochniak said,”“I had a calming effect on myself, just not overthinking situations, just being more creative.Like more artistic. Being free and doing what I have to do and not having so much tunnel vision.I felt like wherever the fight went, I was cool, calm and collected.”

“All I know is he’s an MMA fighter, he’s got a lot of hype behind him, and I’m not underestimating him.I never underestimate anyone. April 7, I’m going to show up.I’m just trying to take his hype train away and take all his fans and put myself on the map.”

Bochniak thinks him being a counter er who sticks mostly to the basics,he can cause some troubles to Magomedsharipov who is more prone to get into bad positions due to the explosive style of his fighting.

On his strategy against Magomedsharipov,“I can’t put myself in stupid positions and get out of position too much,” Bochniak said. “I feel like these flashy guys, they’re going to put themselves out of position a lot more than I will. So I’ve just got to be ready, stand in the pocket and throw.”

UFC:Justin Gaethje plans to ask for Alvarez rematch or title shot after UFC on Fox 29