UFC:Leon Edwards shares his desire for a ranked opponent,his respectfull call out of Jorge Masvidal and his thoughts on Till vs Thompson 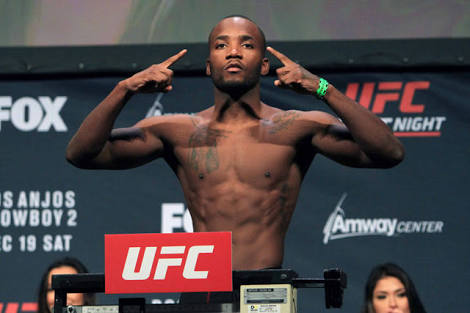 Leon ‘Rocky’ Edwards (15-3 MMA,7-2 in the UFC) is a #14 ranked Welterweight contender and a former BAMMA welterweight champion.He recently extended his winning streak to five after his victory against veteran Peter Sobotta at UFC London.

In his post-fight interview, Edwards called out the #7 ranked welterweight contender Darren Till who was in the attendance at UFC London.Till was scheduled for a main event slot in his hometown of Liverpool on May 27.Till however shook his head in negation.Till is now scheduled to fight #1 ranked Stephen ‘Wonderboy’ Thompson. wanted to fight in his card,he tweeted,”Liverpool is only a hours drive I could be back home for Sunday dinner”.With that out of the equation,Edwards shifts his focus on other cards and opponents.(via Twitter):

“That was the only way I was fighting on UFC Liverpool, if it was the main event against Darren Till,” Edwards told MMA Fighting.Everyone else is booked anyway. I wouldn’t get a well-known opponent even if I did fight in Liverpool. The best thing for me to do now is to wait for July and try to get a ranked opponent on the Stipe vs. DC undercard.”

Till before being booked with Wonderboy called out Masvidal,Masvidal however denied the offer saying he will be free to fight only in June.Edwards seems to have grab this opportunity to call out Masvidal.(via Twitter):

Most of welterweights are booked up. @GamebredFighter you say you're ready for July. What's good? #UFC226

“I’ll be pushing for either Jorge Masvidal or Donald Cerrone,” Edwards said. “Stylistically, I think I beat them both quite easily. Masvidal is the only one in the top 10 that isn’t matched up, so that’s the main reason that I want him in July. I think it’s a perfect fight for me. He’s a big name in the sport.”

On the booking of Till and Wonderboy,Edwards said,“For the Liverpool event to be successful, Till needs to win this fight 100 percent. feel like the UFC are putting all their eggs into one basket with him. Stephen Thompson is a really elite welterweight. I remember this happening so many times in this sport where they try to build up someone and it’s all fallen to pieces,” he said.

“I think ‘Wonderboy’ wins the fight,” Edwards said. “I think he has too much of an advantage over Till stylistically. You see both guys moving forward in a straight line a lot, but I think ‘Wonderboy’ has better movement. I think it’s going to be a hard night’s work for Till.As I said, I can’t remember a single opponent Till has beaten apart from Cerrone. Everybody’s talking about his knockout power with everyone else he just drops them, he can’t stop them. I’m going with ‘Wonderboy’ for that fight.”

UFC:CM Punk will fight on the UFC 225 card in Chicago