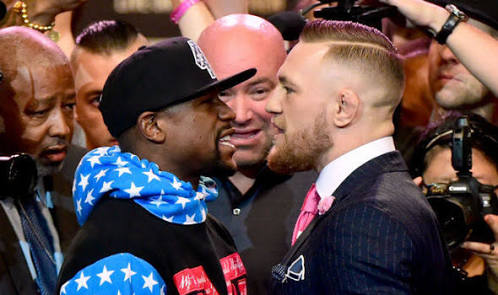 McGregor obviously came in as a huge underdog with +500.Floyd was -900 favourite with a 49-0 perfect record.As expected, May weather started the fight patiently with McGregor throwing blows at him.The obvious plan was to gas out McGregor.Mayweather was successfull in  executing this plan as he won the fight against a drained Conor McGregor in the tenth round via TKO.Judges gave the first 3 rounds to McGregor.

Few months after rumours began to rise of Floyd Mayweather fighting inside the Octagon.On January 30,2017,Mayweather posted a video of him entering the Octagon and thee next day he made a video saying,”2018,Floyd ‘Money’ Mayweather,MMA,What are the odds?”,thus teasing a MMA debut.(via YouTube):

When asked about how this fight would go to one of the Octagon’s most well known face,Octagon Girl Arianny Celeste by TMZ Sports,she gave shocking answers.(via YouTube):

She further added that she would love to see Mayweather inside the Octagon as he looked good that fight and she would like to see it happening again but the opposite side.

When asked about Mayweather’s chances she said,”I’ll give him a chance,they both looked amazing in their last fight and I would like to see that. ”

When asked who’s more hotter Arianny said Floyd,she mentioned,”Conor has swag but Floyd’s swag is on an another level,he’s like the king is swag’s.”

When asked about potential opponent for Mayweather she said she would like McGregor to fight Mayweather. However,she mentioned that she loves Diaz Brothers as well.”

Previous articleUFC: Jason Parillo feels that Amanda Nunes is a perfect stylistic match for Cris Cyborg
Next articleUFC:Amanda Nunes vs Raquel Pennington set for the Bantamweight Title at UFC 224 in Rio de Janeiro