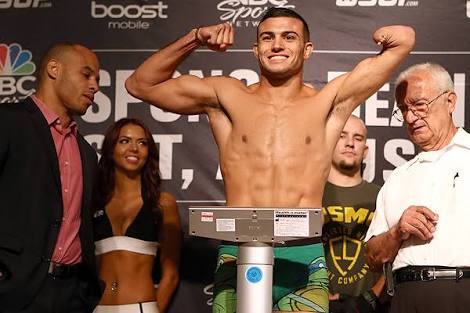 In a gruesome and extremely competitive sport like MMA,competing with a small inability can be difficult,especially at a higher level.However the Springfield, Massachusetts product has proved everybody wrong.Fighters with the nickname ‘Notorious’ have always been proven special to the sport and so is Nick ‘the Notorious’ Newell.

Newell was born with congenital amputation of his left arm which ends right below his elbow.Before turning pro,Newell had an impressive amatuer record of 5-1.However,Newell would never get more opponents as other fighters didn’t want to fight a one armed fighter.As if they win,it would’ve been against a one-armed fighter and if they lose,it would be against a one-armed fighter.From not finding opponents,Newell has reached a stage where he is knocking on the door for a UFC contract with an even more impressive record of 14-1.

On October 17,2015,Newell announced his retirement from the sport.However on March 9,2018,Newell came out of retirement to face Sonny Luque at LFA 35.This is his debut with the promotion.Newell quickly took Luque down via double legs,took his back and choked him out at 2:10 of the first round.(via YouTube):

Newell in his 14-1 record has fight in well known organisations like Cage Titans and XFC where he also became the Lightweight Champion.(via YouTube):

Newell was the signed by the World Series of Fighting(WSOF) organisation.He amassed a 4-1 record in WSOF as well with his only loss being against champion of the division Justin ‘The Highlight’ Gaethje who is now the #6 ranked Lightweight in the UFC.

Newell has a good wrestling base with around 300 wins in his high school and college career.