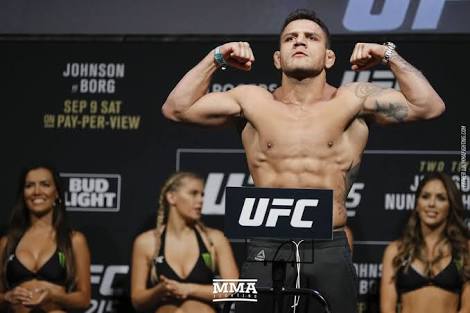 While not officially announced by the UFC, according to a source the interim welterweight title fight between Rafael Dos Anjos (28-9 MMA, 17-7 UFC) and Colby ‘Chaos’ Covington (13-1 MMA, 8-1 UFC) is set.The fight is expected to be announced by the UFC any minute now and both the fighters will participate in a press conference in Brooklyn, New York this Friday.

In an interview with Helen Yee, Dos Anjos revealed his purpose to take the fight with Covington, as he could have waited for champion Tyron Woodley to return from his injury.His ultimate purpose though was to grab the interim belt as that would make his fight with Woodley imminent.(via YouTube):

“I was waiting to fight Woodley, but I was told Woodley was only able to fight [at the] end of the year, around November, December, and I can’t wait that long,” Dos Anjos said. “My last fight against [Robbie] Lawler was in December of 2017, I can’t wait one year to fight Woodley. I have kids and I need to keep going with my career, and Colby Covington is the next guy in the line, especially for the interim title. The guarantee that I have for this fight is that I’m fighting Woodley next. That’s the most meaning of the interim belt for me, is that I have the fight against Woodley for sure next.”

Covington infamously called out Brazilian MMA fans who were at the attendance at UFC Fight Night 119 in his post-fight interview. Covington after securing the biggest win of his career by beating former welterweight and middleweight title challenger Demian Maia foul-mouthed the Brazilian fans which lead to outrage in the entire MMA community.(via YouTube):

“It’ll be good to be [in Rio de Janeiro] performing, especially against this kind of guy,” he said. “He’s been talking bad about the Brazilians, and talking a lot of crap. And I’ll just go there and shut his mouth.I’m going to teach him some respect,” he said. “It’s about being humble and respecting people’s country. You can’t go to somebody else’s country and offend everybody else. He called people ‘filthy animals,’ but I’m going to ask the Brazilian crowd to let this [be] on my hands. I’m going to take care of business.”

UFC 224 will take place on May 12 at Rio de Janeiro in Brazil. Women’s Bantamweight champion Amanda Nunes will defend her strap for the third time against Raquel Pennington.