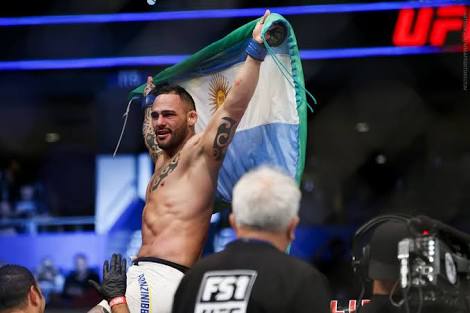 UFC Welterweight division has it all.New upcoming talent,established veterans,exciting prospects and a lot of talent.Fans truely believe it has taken the tag of ‘most stacked division’ from the Lightweight division.

Another slug fest is in the works as according to reports,Santiago ‘Gente Boa’ Ponzinibbio(26-3,8-2 in the UFC) looks get a main event spot at UFC’s first visit to Chile.

The company will break into South America except Brazil for the first time and the South American Ponzinibbio looks perfect to fill in that spot.However with a six fight winning streak on his resume,Ponzinibbio wants a highly ranked welterweight namely Stephen ‘Wonderboy’ Thompson or Donald ‘Cowboy’ Cerrone.

In his interview with MMA Junkie Ponzinibbio said,”“I think it’s a good opportunity to headline the fight in Chile,I am the guy from South America. I have a big following in Argentina, in Brazil, in Chile – everywhere. They know me after ‘TUF: Brazil.’ It’s a good opportunity to have a big fight for the fans. The fans know I am ready for a big fight.”

Ponzinibbio has trained in Brazil and being an Argentinian he thought he would have problems of being accepted in the community keeping in mind the rivalry between Brazil and Argentina Soccer teams.However, with his performances he has earned fans in Brazil,Argentina and Chile.

Ponzinibbio explained his call outs of Thompson and Cerrone by saying,”I am ready for the top five,I am ready for anyone in this division. I could fight Tyron Woodley tomorrow. I am ready for any situation. I asked the UFC for ‘Wonderboy’ because I think we would have an exciting fight. Two high-level striker guys, and Cerrone too.

“I would want ‘Wonderboy,’ but I think he has an injury and still has to rehab. If ‘Wonderboy’ can’t, OK, give me Cerrone. I think it’s an exciting fight for the fans. For the first time in Chile, it would be a really exciting fight I think.

With Wonderboy struggling with hand injury,Ponzinibbio shifts his attention on Cerrone.He said,“Not many guys like to fight in other’s towns, but Cerrone will do it,For this reason I think Cerrone is a very good option. I know he will fight anyone in any country.”

Other potential bout can be against Darren Till who called out Santiago Ponzinibbio after winning his fight in September 2017.