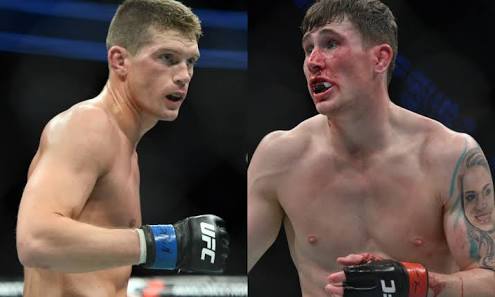 Former two time Welterweight title challenger Stephen ‘Wonderboy’ Thompson(14-2-1 MMA,9-2-1 in the UFC)will step on enemy territory to face the undefeated scouser Darren ‘The Gorilla’ Till(16-0-1 MMA,4-0-1 in the UFC) at UFC Liverpool on May 27,2018.

Thompson in his recent chat with BJPenn.com’s Chris Taylor made his intentions clear about the fight saying,“It’s going to be a good one for sure. I definitely plan on finishing him”.

The scrap between Thompson and Till was a much anticipated one.Till after his victory over Bojan Velickovic at Fight Night 115 in Rotterdam, expressed his desire to fight Santiago Ponzinibbio. However Till was slated to fight two time Lightweight title challenger Donald ‘Cowboy’ Cerrone just five weeks later at UFC Gdansk in Poland.After his stunning first round TKO,Till called out Welterweight hot head Mike ‘Platinum’ Perry who was in the attendance.Wonderboy on the other hand expressed his desire to fight Till at a pre-fight interview of UFC 217 in November,2017 when he defeated Jorge Masvidal via unanimous decision.

Finally this fight being materialised is a striking delight for fans.Both are exceptional strikers.Thompson is a 6th degree black belt in Tetsushin-ryu Kempo,which is form of Japanese martial art.He put together an unbelievable kickboxing record of 57-0 before turning to MMA.Till on the other hand is a Master in Muay Thai.

Till has size advantage whereas Thompson has experience and fight IQ on his side.However Till is not new to this experience factor as he has a victory over veteran Cowboy Cerrone and same goes for Thompson as he has victories over current champion at a weight class above in Robert Whittaker and former Welterweight champion Johnny Hendricks who is now a Middleweight as well.

Till also has the same tions going into the fight as he mentioned in a media scrum.(via Twitter):

A reminder of what Darren Till said at a media scrum last week on the prospect of fighting Stephen Thompson:
"He's such a good striker, he's intelligent, he's not a brawler. My fight IQ is higher than his. I know I can out smart him. I'd knock him out and devastate his life."

As an interim title fight between former UFC Lightweight champion Rafael Dos Anjos vs #3 ranked Colby Covington is targeted for UFC 224 in Rio de Janeiro, the winner will get the title shot vs the champ Tyron Woodley who is now injured.However, a win in this fight would make Till or Wonderboy a step closer to that title.