UFC:The winner of the UFC 223 bout between Nurmagomedov and Ferguson to be crowned as the undisputed Lightweight Champion 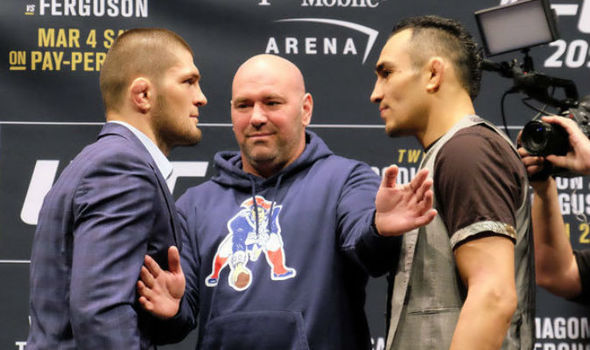 Although being the most inactive champion ever in the history of the sport,’The Notorious’ Conor McGregor is still the UFC Lightweight Champion.

UFC president Dana White confirmed to the Los Angeles Times,that the UFC will strip McGregor of his Lightweight Title,the moment interim champion Tony Ferguson and Khabib Nurmagomedov step into the Octagon at UFC 223 on April 7 in Brooklyn.

White said, “As soon as one punch is thrown, it’s on for the full title, and it’s only fair,” White told the Times. “They’ve both worked their way up to No. 1 and No. 2. They deserve a shot.”

The UFC announced the title at the UFC 25th Anniversary Series Press Conference but declined to say whether McGregor has been stripped.However White didn’t answer questions in a way that would show some clarity.

McGregor last fought at the historic UFC 205 card on November 12,2016 defeating Eddie Alvarez via TKO in the second round.McGregor hasn’t fought since then thus staying inactive for 1 year 3 months without defending the title.

McGregor fought five weight class boxing champion Floyd Mayweather in a super fight.McGregor lost the fight via TKO in the tenth round of the fight.However McGregor made a whooping $30 million,which is nearly 10 times of what he made last time in his bout vs Eddie Alvarez at UFC 205,his previous high salary. With PPV points and all things considered, his earnings is expected to have crossed the $100 Million mark.

Meanwhile,dominant Lightweights Tony Ferguson and Khabib Nurmagomedov have stamped their authority on the lightweight division in the UFC. Nurmagomedov is on a 9 fight win streak with his last performance being a one-sided domination against Edison Barboza.

Khabib won the fight via unanimous decision(30-25,30-25,30-24).Ferguson is on an impressive 10 fight win streak as well with his last performance being a submission victory over Kevin Lee to win the UFC Interim Championship.

“This is good news for the fans,” White said. “I always hear about, ‘What will you do if this guy leaves?’.This is a sport first. People leave, they’ve made money and moved on. It happens.”White has repeatedly stated there is no guarantee McGregor will ever fight again.