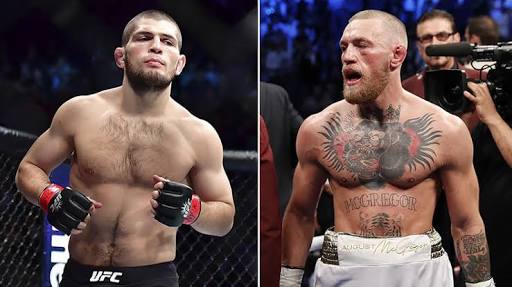 On January, 2018,UFC confirmed that they will be making their first trip to Russia at the world renowned Olympic Stadium.

The recent picture on Wikipedia edited ‘UFC 228’ with just ‘UFC’ indicating that they might not be completely committed but that is the direction plans are headed in.(via Wikipedia): 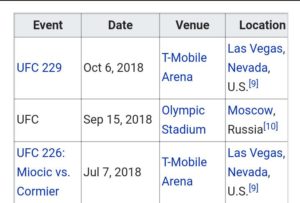 The idea of UFC hosting a card in Russia was always on air.After Lightweight Contender Khabib ‘The Eagle’ Nurmagomedov dominated and submitted Former Lighweight(now Featherweight) Michael ‘The Menace’ Johnson in the third round at the Historic UFC 205 card,UFC President Dana White said the UFC was talking about an event in Russia featuring the ‘Eagle’.

In February 2017,White in an interview with ESPN Sports Centre,was asked what new territory the UFC would be entering this year.”Russia, Russia” White said without needing to think about it. “We’re are going to Russia and there are so many UFC fans in Russia it’s crazy.We’ve been trying to figure this thing out–how to get in there the right way and put on an event and start grooming some of this Russian talent.”

The obvious choice for a main event in Russia would definitely be the undefeated 25-0 Khabib Nurmagomedov.On June,2017 White also said that UFC Lightweight Champion Conor McGregor would like to fight Nurmagomedov in his home country.Nurmagomedov’s father and coach Abdulmanap said in an interview that UFC’s first visit in Russia might be “connected with us”.

With Nurmagomedov being booked against Interim Title Champion Tony Ferguson at UFC 223 in April and the talks of Conor McGregor being stripped of the title,makes the perfect set up for a main event in Moscow hence making the decision of UFC changing the card to PPV makes things very interesting. However Nurmagomedov would like to clinch the title first defeating Tony Ferguson to increase the chances of him facing McGregor.

Other features on the card fans would love would be Featherweight Zabit Magomedsharipov who has taken the Featherweight division by storm earning Bonuses in both of his fights with the UFC.Both Khabib’s cousin’s recently signed with the UFC and fans would love to see Bantamweight Said Nurmagomedov and Welterweight Abubakar Nurmagomedov. However,Abubakar is now with the Professional Fighters League in their Welterweight Grand Prix.