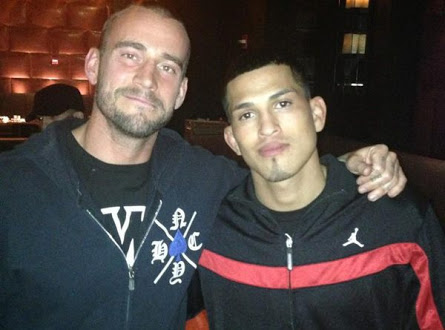 Former WWE Pro Wrestler Phil Brooks aka CM Punk is reportedly training for his much anticipated comeback at UFC 225 in his hometown of Chicago, Illinois on June 9,2018 against rumoured opponent Mike Jackson.

Punk signed with the UFC in 2014 at the age of 35.After two years of training, Punk was slated to make his debut at UFC 203 on September 10,2016 in Cleveland, Ohio against new comer Mickey Gall.Punk came in with the strategy of digging his right hand on Gall as Gall being a BJJ Brown Belt had the credentials of ending the fight on the ground.As the bell rang,Punk charged in forward with a looping overhand right.Gall on his instincts, got a takedown and started unleashing ground and pound on Punk before submitting him via rear naked choke at 2:14 of the very first round.Needless to say Punk was disappointed with his performance but went straight back to the drawing board.

If Anthony Pettis has to be believed then Punk has definitely gotten better since his last outing.“I see him every day, man. That guy’s in the gym every day,” Pettis said Monday on The MMA Hour. “He’s probably one of the hardest workers in the gym. He’s always there, always improving, and yeah, he’s definitely gotten better. You put that much time into [the game], you’re going to get better. He’s working the gi, he’s working no-gi. He’s training with top-level UFC guys inside his weight class, so I think we should see a better performance.”

“It doesn’t surprise me. He’s a competitor, man. And he loves the grind. I don’t know what else he’d be doing if he wasn’t doing this. He’s just, he’s always in the gym. So in the short time I’ve known him for his first fight to this fight, it’s the same, the dude is just pushing hard, man. He’s grinding, he’s getting better, he’s putting the mat time in, and there’s no way around getting better besides putting the mat time in.”

Previous articleBoxing: Jesus Martinez and Alejandro Santiago battle to second consecutive draw
Next articleUFC: Michael Bisping reveals that he suffered a major injury prior to the fight against GSP