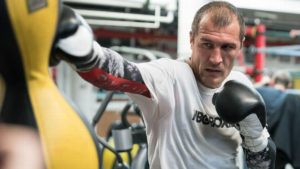 Before fans at the Theater at Madison Square Garden enjoy two light heavyweight championship bouts Sergey “Krusher” Kovalev vs. Igor Mikhalkin, and Dmitry Bivol vs. Sullivan Barrera on Saturday, March 3, Main Events   serves up a menu of top international and local prospects on the non-televised undercard.

According to Main Events’ matchmaker and 2015 NABF Matchmaker of the Year, Jolene Mizzone, “matching an undercard like this is a breath of fresh air. The ‘A’ side fighters trust me to do my job and match them with the right opponents. They all want to challenge themselves to be ready when they get to the bigger fights. Some of them even asked me for tougher opposition, which doesn’t happen much these days.”

Vaughn Alexander (11-0, 8 KOs) of St. Louis, Missouri and older brother of former welterweight world champ Devon Alexander, returns to Madison Square Garden 14 years after his 2004 victory there, as he works his way back into the middleweight division. He will face Jaime Solorio (14-4-2, 8 KOs) of Ensenada, Mexico.

Alexander was a rising star when he was sent to prison and served an 11-year sentence. The 32-year-old picked up his career where he left off with life lessons learned and gratitude for the second chance Main Events and his hard work have provided him.

Solorio, 29, is a come-forward fighter and bigger than Alexander. He’s only been stopped once. Solorio will test Alexander’s ability to handle his size and aggressive approach.

Galarza, 32, made his professional debut in 2010 and did not face defeat until 2015. After he signed with Main Events following a 14-month layoff, Galarza won a decisive decision victory in November and can’t wait to continue his road back to championship contention. Outside of the gym, Galarza dedicates his attention to his charitable organization, Youth Fighting Forward, which offers boxing lessons, as well as mentoring and tutoring to underprivileged kids in Brooklyn and Connecticut.