Unified Rules in MMA and Why We Need Them 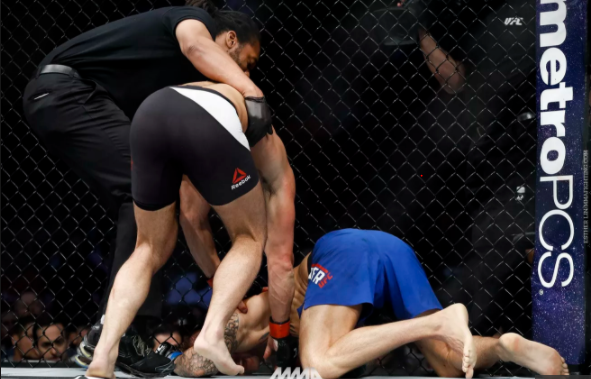 This week the UFC put on what is arguably its best show of the year. The event, however, was not without its fair share of controversies. In the prelims headliner, former lightweight champ Eddie Alvarez and Dustin Poirier were having what could potentially have been a fight of the year candidate. The fight was halted towards the end of the second round after Eddie hit Poirier with some illegal knees to the head. The ringside doctors ultimately deemed Poirier unfit to continue and the fight was declared a no-contest by the referee Herb Dean.

There were many problems with the whole situation. The fact that Herb Dean decided to call this a no-contest rather than a disqualification loss for Eddie Alvarez was highly controversial. Many in the MMA community including UFC president Dana White thought it should have been a DQ. Then there is the question of Dean allowing Alvarez to throw not one but what looked like three illegal knees to Poirier’s head. The first two knees would have been legal under the new rules, but the state of Texas has not adopted the new ruleset and is still operating under the old ones. This disparity of rules from state to state has caused confusion among fighters and referees alike and such incidents are happening a lot more than they used to. The ruleset of MMA is no longer unified.

As many already know, when the UFC initially started, it operated under little to no rules. Even groin strikes were legal at the time! Among the very few things that were not allowed were eye-gouging and biting. However, during the mid to late nineties, UFC (and no holds barred fighting in general) was banned in many states. UFC eventually started working with various government sanctioning bodies and started changing its ruleset, mainly making it stricter and more accepting to the government bodies and wider audience. Finally after years of work, in April of 2001, New Jersey State Athletic Control Board adopted a set of standards that would become known as the Unified Rules of MMA. This ruleset was eventually ratified by all the states and the rules of MMA in USA were standardized, until the rules changed last year in 2016.

The Association of Boxing Commissions approved a set of rule changes in August of 2016 and it was announced they would go into effect on 1 Jan 2017. The most significant of the rule changes was change in the definition of a grounded fighter. Knees and kicks to the head of grounded fighters were illegal under the old Unified Rules. Fighters were considered grounded when anything other than just the soles of their feet were touching the ground and in such an instance, knees and kicks to the head would be considered illegal. This led to what is called by many as ‘gaming the system’. Fighters would just touch the ground when in a bad position to avoid getting kicked or kneed in the head. To combat this, ABC changed the rules of the grounded fighter. The official rule states:

This change was welcome by many but was equally derided. That, however, is another topic.

After the rule changes were made, many states including New Jersey, Ohio, Missouri, Colorado, Virginia, Maryland, South Dakota and Texas announced they would not adopt the new rules. The Unified Rules became a thing of history. Among the main points of contention was the change in the definition of a grounded fighter. And once the rules came into effect, they caused widespread confusion among fans, fighters and referees alike. Just the fact that the rules are different in different states has caused a lot of confusion and has already caused two high profile matches to be stopped prematurely.

Controversy arose at UFC 210 when it appeared that Gegard Mousasi had hit Chris Weidman with illegal knees. The knees were however deemed legal and Mousasi was awarded a TKO victory. The state of New York, where the fight was held, uses the new set of rules.

Conversely, last weekend’s event was held in Texas which still uses the old set of rules. The first two knees that Alvarez delivered would have been legal under the new rules but were clearly illegal under the old rules. Yet, referee Herb Dean failed to stop the bout immediately and did not intervene until Alvarez had hit Poirier with a third knee that would have been illegal under both the old and new rules. While there are a lot of angles to this situation, one thing is absolutely clear: Rules in MMA need to be unified again.

It is arguable that these rules are doing more bad than good but that is not the point of this story. Whether all commissions adopt the old rules, or they adopt the new rules, or they come up with an intermediate solution, it’s imperative that all states use the same set of rules. When a fighter is hurt and is fighting for survival on pure instinct, it is sometimes difficult to remember which state you’re in. Eddie Alvarez also alluded to this:

“I was in a fist fight,” Alvarez said. “I thought I had Dustin hurt and I thought he was a little tired. The first knee, I thought he was playing the game where he had his hand down. Herb (Dean) was very clear about you can’t play the game. So I hurt him with the first one. I think the second one may have been legal, but the third knee was illegal. I saw it on the prompter afterwards that it was illegal, and I apologize to Dustin.

While Eddie’s knees were clearly illegal, he is not to blame for the mess that this situation has become. Commissions need to do something before more high-profile fights end in disqualifications or no-contests. Here’s to hoping that this will act as a reminder to all the governing bodies to put a serious thought into this.