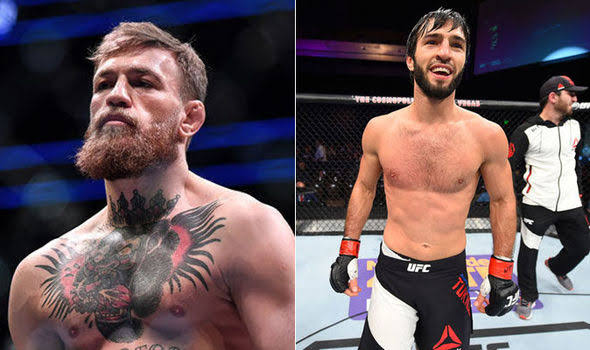 UFC 229 featured the biggest fight in the history of the sport as arch rivals Khabib Nurmagomedov and double champ ‘The Notorious’ Conor McGregor met.

However the card rather got known for the unfortunate post-fight brawl. The brawl had Khabib attacking McGregor’s teammate and vice versa. 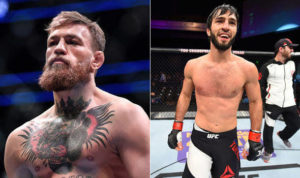 A new video has surfaced in which McGregor can be seen landing a left hand on Khabib’s teammate and UFC featherweight Zubaira Tukhogov. The punch seemed to have rocked Tukhogov and put him on wobbly legs. (via Twitter):

The fight was fairly lopsided as Nurmagomedov defeated McGregor via fourth round submission. A fired up Nurmagomedov then jumped off the cage to brawl with McGregor’s teammate Dillon Danis. The brawl then escalated with Nurmagomedov’s teammates attacking McGregor. McGregor then landed the punch on Tukhogov.

The reaction from Nurmagomedov was obviously as a result of build up leading to the fight. McGregor used his trademark trash talk which didn’t go well with Nurmagomedov.

McGregor, Nurmagomedov and Tukhogov were slapped with suspensions and fines. Tukhogov (3-1-1) made his return from suspension last September at UFC 242. He went to a draw against newcomer LLerone Murphy. Tukhogov takes on Kevin Aguilar at UFC Auckland this weekend.

The brawl however did set up for a rematch between McGregor and Nurmagomedov. McGregor made his return since losing to Nurmagomedov at UFC 246 where he demolished Cowboy Cerrone in just 40 seconds. Nurmagomedov on the other hand, will defend his strap against Tony Ferguson at UFC 249. He will have to go past Ferguson first before setting up the rematch.

Previous article
UFC News: Dustin Poirier issues Twitter callout of Al Iaquinta for bout at 170 pounds – and they go back and forth!
Next article
UFC News: Mark Goddard explains in detail the reason why he stopped Kamaru Usman vs Colby Covington